Canucks 3 Stars 2: No Revenge for Dallas

Share All sharing options for: Canucks 3 Stars 2: No Revenge for Dallas 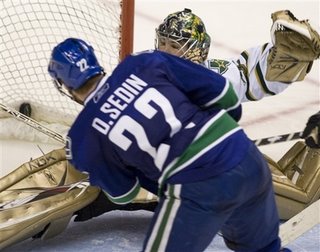 What a great game. Instead of the usual 2-1 score that we are accustomed to between Dallas and Vancouver, we got to see a few more goals in a great matchup.
Vancouver weathered a 1st period Dallas storm, being outshot 11-6 and purely outclassed by the Stars, who wanted to finish us off early. Luongod kept us in it, keeping it scoreless after 1.
A beauty goal by Mason Raymond on a solo effort broke the ice, and the Canucks really didn't look back. Sure, Dallas came close many times, but Luongod and the squad shut them down.
So much for the revenge for the Stars. They must be frustrated, and I laugh at their frustration.

A couple of things:

- As well as Raymond and even Jaffray played, they only got 5:20 and 7:08 icetime respectively. I think I missed something there. These 2 provide a youthful energetic element to this squad, and I like it.

-The Swedish Touch line is going again, and that can only translate into wins. It seems they took Vigneault's challenge seriously and have got their game back.

-What a non-goal by Jaffray. I jumped off the couch in celebration, only to be disappointed because Pyatt clearly interfered with the Dallas defender to create room for Jaffray. Yes that was interference.

-Speaking of Pyatt: after taking 2 consecutive penalties in the 3rd, he could have been the goat had Dallas tied it.

-If we are going to pay to watch Canucks games on PPV, when are they going to be on high definition???

-Unfortunately, this bold performance by the Canucks tonight was overshadowed by Marion fucking Gaborik's 5 goal and 6 point night to keep the Wild on top of the Northwest and Sid Crosby's fight to go along with the Penguin's inability to hold a big lead against the Bruins.

-What's the deal with Marty Turco picking on Luongo's pads?

"It was part comical, part serious," Turco told The Goalie News writer Kevin Woodley on Thursday.
"We all have them. They're usually behind the 11 inches. We all need side protection, and Louie's knees are just a little bit bigger than others so fortunately it sticks out for him."
That was very serious research because I really don't like the idea of larger nets so we are looking at ways we can do thing without touching larger nets," continued Turco with a slight grin, a reference to Luongo saying earlier this year he'd quit if the nets ever got bigger.

Read nothing into those statements, only that Turco is joking around. Luongo was less comical about it post game accusing the media of, basically, blowing it out of proportion. Which Louie was correct in saying. 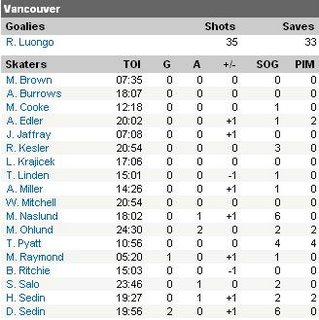