Share All sharing options for: Canucks 3 Ducks 2: Youth is served 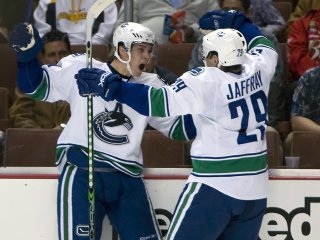 Well, I guess I underestimated the Canucks' abilities.
Praise be to Curtis Sanford! The Ducks outshot the Nucks 35-20, including 16-1 in the 3rd period, but Sanford was outstanding. It's a relief to know that we have such a capable backup, and Sanford more than proved that last night. Fully deserving of the game's first star.
So the kids played an inspirational game. Mason Raymond and Jason Jaffray were terrific with a goal and an assist each. They didn't look out of place at all. I'm excited for both, but especially Jason Jaffray, who is 26-years old and is finally getting his chance in the NHL. He is still smokin' with the Moose, but you know he is going to do everything in his power right now to stay with the big team. Heads up, this guy could go on a streak!

"It was a great feeling to see the look on Mason's face when he got his first one out of the way," Jaffray said. "And when that puck went in for me, I could have jumped five, six feet in the air. It's definitely a moment I'll always remember."

Yeah, well keep it up, dude.

"It's not great for the Canucks to hear that he's (Morrison) going to be out for a while," Jaffray said. "I'm definitely not a guy who's going to fill his shoes, but I'm a guy that's been brought in to maybe soften the blow a little bit. If I can provide offense and create scoring chances, that's kind of what I do."

I think that if Jaffray and/or Raymond keep playing like this, I won't want Morrison to come back! 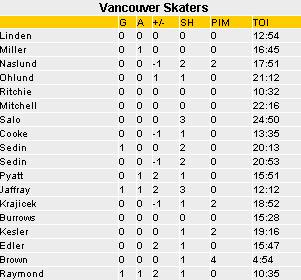 HIGHLIGHTS OF THE GAME

ps: Thanks Ducks, for taking so long to show up in this game. Ha!

pps: did Earl Sleek pick the 3 stars? No way is Pronger star #2! It should be Sanford, Jaffray, then Pronger.

ppps: Thanks Big Bert, for doing your usual SUCK.