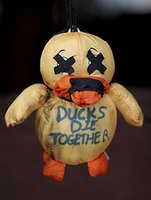 Isn't it great cheering for a team that doesn't lose games when leading after 2 periods? This Canucks team is completely content to play trapping and patient hockey in that scenario. While it puts us on the edge of our seats, especially like tonight's game, as the Ducks bagged a goal with just over 10 minutes left to make it 2-1, you still have to feel somewhat confident that Vancouver will hold the opposing team off.
Tonight was the same ol' story. Up by 2 after 2 periods, the Ducks woke up and peppered 11 shots at Luongo in the 3rd, while the Canucks only hit the net 3 times. That's the beauty of having a good defensive team and a world class goalie in net. A text book Canucks victory tonight, as we have beaten these lame Ducks 3 times out of 3 this season. 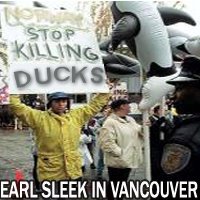 - Pronger was booed every time he touched the puck. What did he ever do to Vancouver? Must have been some bitter Oilers fans in the crowd. If you wanna boo somebody, boo that primadonna Scott Niedermayer for Christ sakes!

- Todd "Useless Tit" Bertuzzi had 1 assist, was a +1 and played 20:32. More or less invisible and floating. Huh. Sure am glad he isn't a Canuck anymore. Enjoy the Bert futility, Anaheim fans!

- that was back-to-back games for the Quacks. They looked like they didn't really get going until late in the second. No excuse though, as Doug Weight pointed out in the intermission. The Ducks were playing so well until they ran into Calgary and Vancouver, and have lost 2 in a row. They are stuck in 3rd place in the Pacific Division, 4 points behind the Sharks and 7 points behind the Stars. Life sucks defending the Stanley Cup don't it?

- a disciplined game by Vancouver. Only 2 times the Ducks had a PP. The Ducks were shorthanded 3 times and the Canucks converted once. Bing-bing-bing, the Swedish Touch line connects again.

-The Canucks take over top spot in the Northwest, 2 points ahead of the Wild.
The real challenge comes tomorrow against the Flames, where we will have to find the energy to win back-to-back games. We have a 5-3 record playing in the 2nd games in back-to-back situations. 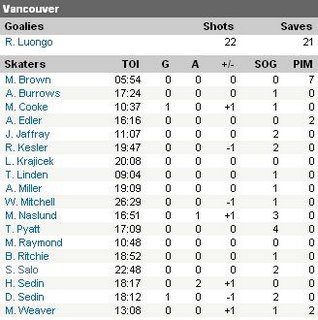