A big thanks to Doobie from the Spoked B for emailing me this news clip, as it made me laugh:
Scientists have found a new threat to the planet: Canadian beer drinkers.

The government-commissioned study says the old, inefficient "beer fridges" that one in three Canadian households use to store their Molson and Labatt's contribute significantly to global warming by guzzling gas- and coal-fired electricity.

"People need to understand the impact of their lifestyles," British environmental consultant Joanna Yarrow tells New Scientist magazine. "Clearly the environmental implications of having a frivolous luxury like a beer fridge are not hitting home. This research helps inform people — let's hope it has an effect."

Click here for the rest of the Fox News article.

Gee, Joanna, thanks for the advice....but fuck off and mind your own country's business! We don't have enough space in our regular fridges for all the beer we drink. haha.

By the way, it appears Doobie has come accross a nude image of Bobby Orr. It's a painting though. No controversy here.

A big hat tip to Temujin for emailing me this image: 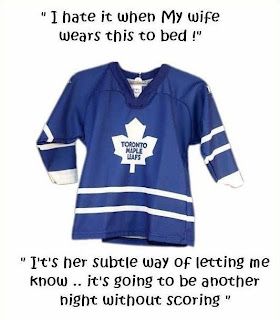 Ha! I think that more applies to the Canucks in the playoffs. The Leafs need a joke made about their lousy defence. Something like this perhaps: 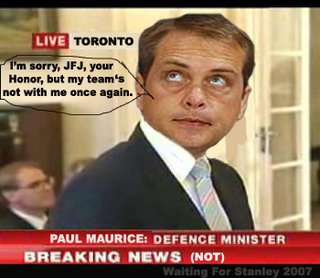 Of course, now the Leafs are 3-0 after all the talk of someone getting fired. Go figure. That won't last though.