That is what TSN is reporting today. Morrison will have wrist surgery today and will be in a cast for 6 weeks.
Morrison had 20 points in 30 games before the injury, and is in the final year of his contract, making $3.2 million per season. He should be back about a month before the playoffs start at best.
This is where I hope Raymond or Jaffray can contribute at a consistent level so that Morrison's absence doesn't sting too badly.

According to TSN, Roberto Luongo WILL play against New Jersey tomorrow. Alright!

It appears that Naslund has caught the Keslerian flu. Maybe they should stop sharing water bottles. He missed practice today.
And just to give you an unnecessary visual: 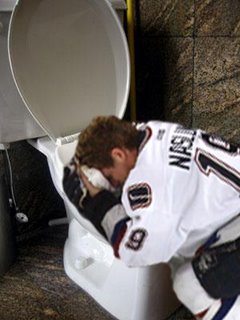