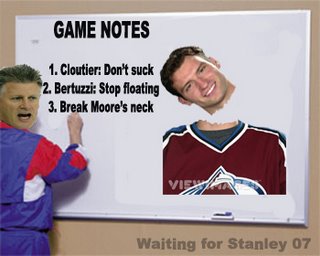 A statement of claim filed in Ontario court by Moore's lawyer and obtained by CBC alleges that then Canucks coach Marc Crawford pointed to Moore's name and number on a board in the Canucks dressing room during the second intermission of that game and said ". . . (Moore) must pay the price."


Well, this is what happens when you get fucking lawyers involved in hockey. They disect the hell out of everything. In this case, it's pathetic. It DOESN'T MATTER if Crawford said that or not. It doesn't mean Crawford meant for someone to break Moore's neck. "Pay the price" can mean a lot of different things, like: drop the gloves with him, open ice hit him, or slam him into the boards with a massive check, all legally of course.
Crawford cannot be held accountable for Moore's pain in the neck. Only Bertuzzi can. Coaches have every right to single out an opposing player and have their own guys rough that player up. Especially if the bastard cheap-shotted your star player. That's the game of hockey.
All this Crawford talk now is a waste of time. Bertuzzi acted out of his own personal problems with anger issues, and Crawford should not be held accountable for that.
And that is the jist of what Crawford will say. You watch. Don't read any further into these new found allegations. They are pathetic....and lawyer bullshit tactics.