Where the Canucks have no game

Share All sharing options for: Where the Canucks have no game 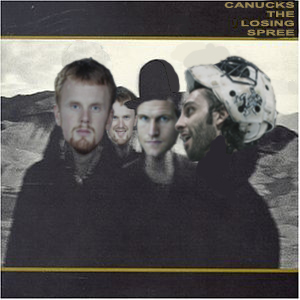 More to come on this post. I see Cherry didn't agree with Vigneault calling out Bieksa and Mitchell to the media/public as they are the heart and soul players. Not sure I agree.

Anyway, I've put a couple of spiced rum and cokes in my veins and now the beer is flowing....I am trying to numb what could be the inevitable pain of a Canuck loss to the Avs tonight. Since I'm feeling pessimistic and ornery tonight, so I figured I'd try to cheer myself up by rewriting the lyrics to the song "Where the Streets Have No Name", a song the Canucks skate out to at the beginning of the game. Here it goes..

Cuz the Canucks have no game....ooooohoh

Cuz the Canucks are so lame....wooohoh

6-2 Avs tonight. The bleeding continues. May reverse psychology kick in right about now!

Well this is just unbelievable. The Canucks came out with a vengeance tonight and were relatively solid in a 4-3 win over the Avs. What a difference a couple of 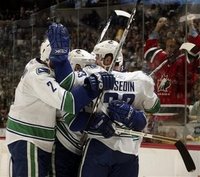 days makes. The Canucks were gelling, baby. Short, crisp passes, great scoring chances, a mad forecheck, a stellar Luongod, the Sedins come alive... Hopefully they can keep this up. This game was inspiring to watch and is really how the Canucks should play more often.
Good stuff. Hats off to the team for turning this shit around.

-Ryan Kesler continued his inspired play tonight and played over 20 minutes.
-Luongo was plain ol' terrific. No bad goals let in by him. He was solid.
-the Canucks came together as a team tonight. I don't know if they got hammered the night before and went to the strippers, but whatever Vigneault suggested,...worked.
From what I remember, someone on CBC said that Vigneault may or did call out his leaders of the team. They came through tonight. 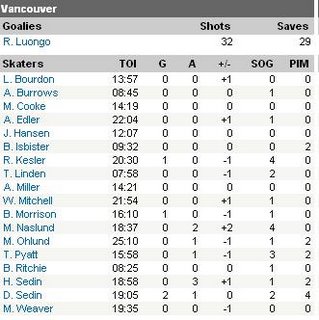