Trouble at the Leaf House

Share All sharing options for: Trouble at the Leaf House 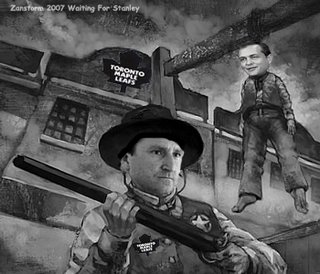 Ah, yes, with losses to Phoenix and Dallas this past weekend, the Leafs find themselves out of a playoff spot, and Leaf Land is all a flutter. Who's head is going to roll? Steve Simmons wrote an article in the Toronto Sun this morning claiming that a source told him that John Ferguson Jr. had tried to fire Paul Maurice but was not allowed to. JFJ was quick to nullify that story today, saying:

"There isn't a shred of truth to that assertion," Ferguson told TSN. "This is made up, its a complete fabrication."

Simmons wrote quite a ballsy piece actually, with plenty of other hard statements, like JFJ's head is on the chopping block:

It isn't known who the Leafs are leaning towards (for a new GM) at this point, but they have held informal conversations with NHL vice-president Colin Campbell and television analyst Glenn Healy in recent days while Sun Media also has reported there is interest in up-and-coming, under-contract executives such as Ron Francis in Carolina and Steve Yzeman in Detroit. Another source indicated some interest had been expressed in Hall of Fame player Mark Messier, currently unaffiliated with an NHL team.
Another name that has been brought up is former Leafs star Doug Gilmour, who currently is learning the ropes in the Toronto front office.

Ballsy article indeed. Myself, I find it hard to believe much of what Simmons says, especially because I don't even like the guy, and the Toronto Sun is so tabloid-like in nature. So we'll see what happens. To me, GM's get canned after the regular season is over and the team misses the playoffs. The immediate fix now would be to a) fire Maurice because the players won't do what he is saying and are tuning him out or b) make a blockbuster trade to shake things up. Maybe that is something that JFJ has not done and should be doing but just can't find a good trading partner or a deal that makes sense.
You can't quite fault JFJ for who he has brought in lately, except in hindsight only. I think he has provided the tools for a successful team. Then it is the job of the coach to get these fuckers on the same page. This is arguable in itself.
I wouldn't mind seeing a trade myself. A trade that gets McCabe out of T.O. I believe there are a few dolts on this roster who have been problematic for years now and just won't conform to or have the ability to play a winning style of hockey. And yes, McCabe is one of them.

**UPDATE**
The owner of the Leafs, Richard Peddie tried to calm the storm a bit this morning, saying:

"We're trying not to be reactionary in this tough time," Peddie said after the Leafs posted a pair of losses over the weekend.
The fact is John is under contract and we want him and Paul focused on winning hockey games and turning around this situation," added Peddie.
"We're clearly disappointed in our start to the season," said Peddie. "It's not what we had envisioned. But we're monitoring the situation."


-TSN's Bob McKenzie has a take on the whole Leafs management and why JFJ still has a job. I guess I don't even know the full extent of the Leafs' issues. Wow.

Artist Ken Henderson has a great Toskala-Raycroft therapy cartoon up from a couple weeks ago. Worth a look.

What do you think? What is going to happen here?

1. JFJ is getting canned
2. Maurice gets the axe
3. Nothing. The team will work its way out of the slump.
4. JFJ pulls off a deal to shake the team up.
5. The world comes to an end (nuclear holocaust) before anything can happen.