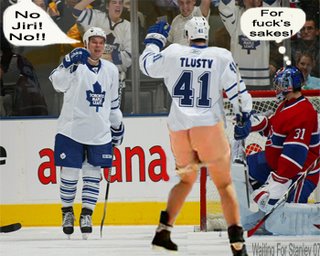 I thought maybe the Tlusty nude images would take some of the media attention away from the Leafs' lackluster play lately, but apparently it only compacted the problem. Line of the week goes to Wade Belak:

"It's tough in this city to censorize anything," said Leafs forward Wade Belak on Wednesday. "I've been known to take out the trash naked from time to time. Now with all these allegations with Jiri I don't know if I'm going to feel safer out there."

It's hard to single out Toronto media, Wade. If that happened anywhere in Canada it would be just as controversial.
Personally, I think the whole thing is damned funny!

If you want to see the 3 photos, you'll have to watch this TSN clip of the story. The images are halfway through the segment. Sickos.