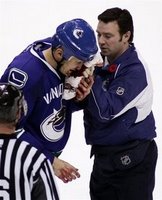 If you paid to watch last night's game you must be kicking yourself, thinking you could have bought another half sack of cheap beer to drown your sorrows in. Or maybe a really cheap hooker......
Half of my hangover today is self-induced, the other half is Canucks-induced.
The Canucks' early season continues to spiral downward, as they outshot the Predators 29-15 last night and still managed to lose 3-0. The Predators scored on their first 2 shots of the game and that really put a fragile Canuck squad on its heels, as Nashville played loosey-goosey the rest of the way and more or less shut the Nuckleheads down.
It's amazing how glaringly obvious that this Canuck team is playing nervous and off it's game. It's frustrating to watch. Now you can see players becoming selfish, trying to do everything themselves, going through 3 or 4 defenders, and other players who simply refuse to shoot the puck because their confidence is gone. Ah yes, the signs of a slumping team. And it may not go away anytime soon. It seems that the more time goes on, the worse the team's chemistry gets.
I gotta say right now, Ray Ferraro is a blessing to have on PPV. He has a great hockey mind. He mentioned that the team has to settle down and start with and win the first 5 minutes of every period. Simplify. But that is all easier said than done. The full roster has to commit to it 100% in order for it to work. You could hear in the post game interviews that this is not the case right now. Not everyone is on board.
In last night's game, Luongo had to make those saves, especially the first one, but didn't. The fans were jeering him in the stands. Wow.

"To boo our goaltender?" asked Morrison. "I thought that was maybe crossing the line a bit."

It seems every game has some form of tragic error in it. The Canucks fuck up once and the other team puts it in the net.
And now the injuries... 2 Canucks (Salo and Bieksa) go off the ice bleeding last night, both probably out for about a month at least. They couldn't stitch Bieksa's calf at GM Place last night and he was sent to the hospital.
Salo took a puck in the face from one of his own guys (no names....Edler!) and may have fractured his orbital bone.
The loss of those 2 d-men should be looked at as a postitive. This team needs a bit of change to the roster to give it a spark, in my opinion. That is why the Forsberg rumors are only going to become that much stronger now. And rightfully so. A player of Forsberg's calibre is needed right now. A shakeup. Yes, that means I am hitting the panic button and losing my patience right now.
Vigneault isn't.

"We’re going to stick together, and we’re going to fight our way through this," said Vigneault. "That’s all we can do right now."


Other Canuck issues:
-the Sedins are officially ineffective out there. Splitting them up last night didn't do any good and probably only led to separation anxiety.
-we have the worst home record in the NHL. 1-6.
-a dried up powerplay. We were 0-for-6 last night. Nashville was 2-for-4.

Pro's
-the play of Kesler especially was tremendous. He just isn't getting the results.
-Ohlund and Hansen looked good as well.
-Bieksa looked improved until the skate lacerated his calf.
-a couple of wins, preferably back-to-back could turn this team around.

Hang in there, Canuck fans. This will probably get worse before it gets better.

Highlights....I mean LOWLIGHTS of the game.