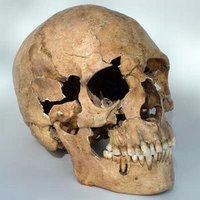 TSN is reporting that Sami Salo is at least another month away from returning from his severely broken nose/cracked sinus cavity injury. Mmmm, a cracked sinus. That's got to suck.

Word is that Lukas Krajicek is out about 2 more weeks away from returning after cracking a bone in his ankle last month. In my opinion, the loss of Krajicek is worse because he was playing so well at the time he was injured. Salo wasn't. It seems like Nonis was a Nostradamus in the offseason by acquiring so many defencemen. I thought he was on crack. Now he looks like a wise guy.

Pavel Kubina will miss some serious time after suffering an MCL injury during the Leafs' Saturday night loss to the Rangers. You know how it is with MCL injuries....a fair chunk of time missed.
Uh-oh, I'm talking about the Canucks AND the Leafs again. It's almost time to start changing the banner on this site again isn't it?

How many of you watched the Sens-Habs game early on Saturday? What a classic. That is what hockey is all about right there. Lots of chances, great goaltending, a suprise ending. Great game.

I was just talking hockey with a few of my co-workers and we were wondering which coach is going to get the axe next. One guy said Mike Keenan. I disagreed. Who do you think?

-Mike Keenan
-Dave Tippett- Gad the Stars are awful right now.
-Paul Maurice- Leafs are terribly inconsistent and seem to tune him out half the time.
-Wayne Gretzky-No love for the great one in the desert
-Glen Hanlon- the Caps are fading again and had high expectations.

I say Dave Tippett. The Stars have no excuse to be losing with that kind of roster.

Enjoy your long weekend everybody. And a big thank you and massive respect to those who have fought in the past and the present for our freedom that we so richly enjoy.