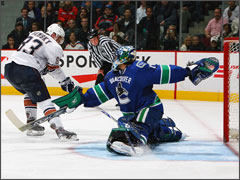 "I don’t think we did exactly the right thing," Brendan Morrison said after the shootout. "[Garon] is out so far initially to challenge, we should’ve come in with some speed, then slowed up so we got his rhythm off, his timing off. But, I mean, everyone tried to deke. We should’ve maybe tried to keep it simple and get a couple of shots."

A sad loss to the Coilers last night, but hard to feel overly bad about as we get a point, Luongo gets the shutout, and for a 1-0 game it was pretty damned entertaining.
What the hell is up with this Garon guy in Edmonton? For a big goalie he sure is mobile, much like Luongo is.
-I'm not sure about the decision to use Byron Ritchie in the shootout. He must have had some sweet moves that the coaches saw in practice.
-Anytime a goalie successfully pokechecks a player in the shootout, like Garon did to Morrison, I like it. Anytime a goalie goes for the pokecheck and misses, he looks stupid.
-Hemsky's winner was a thing of beauty. Admit it.
-Canucks.com had a crazy stat: the Canucks only won 32% of the faceoffs last night. If you took out Ryan Kesler's totals they would have only won 21%.
-The Canucks finally lose to a divisional opponent, and the Oilers finally get their revenge after so many losses to the Canucks. Jeez, you never would have heard THAT in the 80's, huh?