As many of you know, I endure many a long night embracing the Pacific Time zone for Canuck home games. This means I have been a willing slave to NHL Center Ice for many years now and, like you perhaps, have really had no problem with it.

However, Cablevision (you know, the braintrusts who own the team we do not name without cursing and throwing objects) decided to not pick up the Center Ice package until the final minute (note the timestamp) so yours truly, fearing the worst, went with the adventurous Center Ice online package. Same price, same concept but as we come close to the quarter season poll...how does this online adventure stack up to the TV Version? 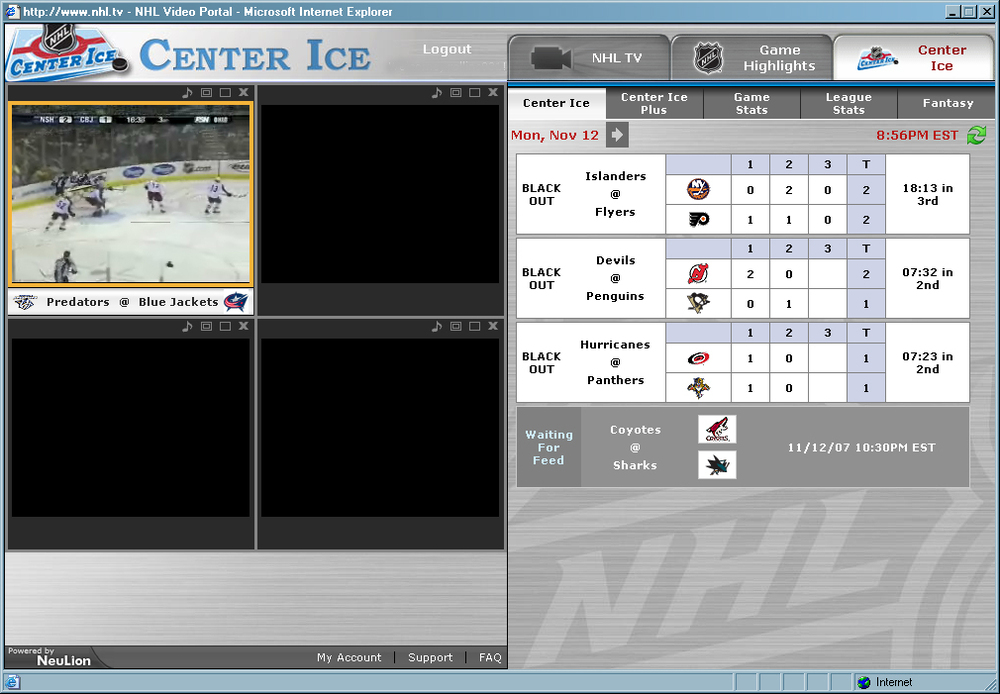 You can watch multiple games at once
Pro: That's cool.
Con: Then again, some TV's allow you to do that.
Con: How often do you really want to watch multiple games? I'd be lucky if there's three games I want to watch at the same time much less four. And to have that 2 by 2 grid full of games, to me, dilutes the fun of watching one on a larger screen.

You can change the size of the game from 1/4 the screen to 1/2 and full screen
Pro: That's cool...see previous point, I am usually not watching more then two games. I'd like to see it as big as possible.
Con: On the rare occasion you want to see more then two? You guessed it, you're watching them on the smaller screens.

Scoreboard in the right frame
Pro: That's cool, I like knowing I can watch the Canucks and see that Calgary is losing without exerting too much effort.

Live game stats
Pro: Very cool option, though not sure it's any faster then Yahoo!, Sportsline or ESPN stats while a game is in progress but still a very nice feature.

Live fantasy stats
Pro: I'm in three leagues, so I can it to tell me about any player I want and, if they're playing that night, I'll see how they are doing. Once again, a very cool addition.

Quality of video feeds
Pro: Not bad if you're getting Sportsnet or the occasional regional Fox Sports one.
Con: I'd argue more then 50% of the feeds I have seen are subpar and a worse resolution then the TV signal. This is all the more obvious when you maximize your game.

You can watch NHL TV specials
Pro: They have short vignettes on random players.
Con: I don't care about many of them. Gionta worked in a hardware store this summer in Rochester. See? You don't care either.

You can play games
Con: Just kidding, you can't. It's an option, but it's blank. Besides, you're supposed to be watching hockey remember?

Technical issues
Con: You cannot turn off the sound for the game even if you hit the icon to mute it.
Con: Don't even attempt to run it on a Mac. Even the video recaps from previous games don't work. Linux? Hahaha...you communists can't watch either.
Con: The feed is about one minute off the live TV feed. So if you're watching and IM'ing someone and they react you know what's going to happen.
Con: The feeds will drop out for no reason. No game I have seen has gone the whole nine yards from the first period. I guess they would tell me that it's my service provider, but it's not...it's them.

Sooo...long story short? NHL Center Ice is fine for what it is and, if you're like me and traveling a bit, not bad to have at all. But, if you have a choice? It's not even remotely close: stick with the TV package and the better video/audio. I admire the NHL for trying the Center Ice package online and maybe they can put something better together next year.

In the meantime, here's hoping the Canucks can make the streak hit four straight and stay perfect against NW opponents on Wednesday against the Oilers. Cowan may be back so why not a bra or two thrown out during the pregame warm ups? C'mon ladies, do you part...I'll be watching on a small, delayed, and pixelated shot on my computer. Think of your Yankee Canuck when you throw them please. Much obliged.