Share All sharing options for: New smoking ban legislature in B.C. is bullshit 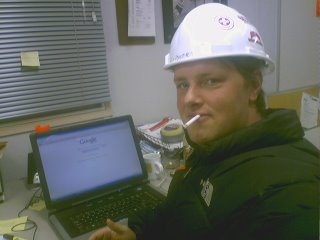 Since the last revision of this document in April 2006 there has been some encouraging news. In November Gordon Campbell, the Premier of British Columbia, announced that the BC government will be bringing in a province-wide smoking ban in all public places by January 2008. This time, there will be no allowances for designated smoking rooms. This comes as welcome news to workers in that province's hospitality industry, whose lungs have been treated as second-class since 2001 when the government overruled the WCB's 100% smoking ban. Too bad the government is waiting until 2008 to clear the air, but better late than never. Congratulations to our colleagues in BC who worked so hard to help their government see the light!

The government is also going a step further by March 2008, as Miss 604 pointed out:

The provincial government has released the rules that will govern its tough new anti-smoking policy, which includes a ban on smoking in all indoor public spaces and puffing near doorways.
Smokers will have to stay three metres away from doors and windows.
There will also be *no* smoking in common areas of apartments and condominiums, nor in work washrooms and lunch rooms.

OK, that kind of legislation (for March 2008) is manageable and mostly understandable. But allow me to tackle the January 2008 law, which is seriously pissing me the fuck off.
First off, let me say that I am sure that some establishments have abused the whole 'segregated smoking area' rules and have not provided proper ventilation. Those business owners need a sledgehammer shot to the knee caps, as they have probably ruined it for everyone else. I am angered over this because the place I work at has a smoking room that cannot be entered from inside the plant. You have to walk outside and enter it from outside the plant, releasing any smoke into the open air and not into the mill. The area above the ceiling tiles is sealed off with thick plastic so that the smoke does not creep along the ceiling space and into other offices. This is a solid way of going about things, as it lets the smokers be exposed to second hand smoke and no one else (unless they chhose to do so.)
Why can't this idea be implemented everywhere and enforced?
Now myself and the rest of the smoking workers have to walk several hundred feet to the front of the building to smoke on their 10 minute breaks, leaving them no time to heat up some food in the non smoking lunchroom as it is too far away.
Yup, you know what I call this? Discrimination. Smokers have been quite passive about smoking laws, but it's about time to take a stand. Anyone want to create a smoker's rights alliance?
Ah, you non smokers, you greenies, you petrified jerks are going too far now. Now you are just being a pain in our ass.
To all the people who are pushing for a smoke-free civilization can kiss my ass. It is my fucking right to smoke. I don't need you telling me what is good or bad for my health. I already know the risks. I also think that all the MSG's and preservatives in foods that we eat are bad for us (duh). I also am 100% certain that a lot of deaths that are blamed on smoking are actually caused by genetics. Yes it's true. And you shouldn't believe every damned thing you see on the 6:00 news either. Think about it. Both sides of my family suffer and have died from heart diseases. Meaning: my odds of having a heart attack are high, whether I smoke or not. But don't think the doctors won't blame smoking for my heart related death if that so happens.
It just irks the shit out of me when people who have never smoked before die of lung or heart disease and some smoking establishment gets the blame for it. Sorry, not buying that 100% of the time.
So, before I go on and rant any further... I stand by my position. Sure, it may go against the popular opinion but I care not.
This new law sucks. It is avoidable. Properly-created designated smoking areas are the best option, like I mentioned how we do it at my workplace.
Ah, but those health conscious-scared idiots will continue to influence government, January will come, I will conform.....or maybe I won't. What are YOU going to do about it? Take a picture of me with your cell phone and report me to the cigarette police? I dare you.
Raise the prices of cigarettes..... I am not quitting.
Make me walk further to have a smoke at work.....I am not quitting.
You can't stop me you anal bastards.
There you go. Am I politically correct? Fuck no!

It's almost time to set up SMOKING establishments. Smoking McDonald's. Smoking Kegs. Smoking airports....haha. And when ever non smokers enter the premesis we set them on fire with our lighters and use their corpse as an ashtray. Alright I'll stop now. I'm just angry.

I think Doctor Denis Leary said it best in his "No Cure For Cancer" CD: