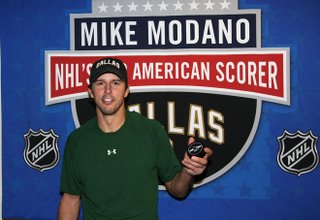 ''The longer it's drawn out, the more it's forced me to appreciate the situation and enjoy it, start having some fun,'' Modano said after last night's game. ''I think it's kind of dragged me down a little bit emotionally thinking about it every night, going out there and trying to make it happen. The two tonight couldn't have been written up any better with the first two shots, two goals.''

Modano now has 1233 points in 1253 games, and accomplished the feat in 242 fewer games than Phil Housley did. Congrats to Modano for the accomplishment. He sure did it in style last night. But what runs through my mind is that Phil Housley really was THAT good of an offensive defenceman to hold that record for this amount of time. Either that, or it doesn't say much for American players in the NHL...... woa hold your fire!!!