Mark Recchi may be on the move

Share All sharing options for: Mark Recchi may be on the move 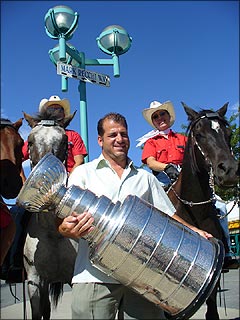 Mark Recchi has been a healthy scratch in four of the past five games.
This prompted Recchi's agent, Rick Curran, to get in touch with Pittsburgh GM Ray Shero. The upshot of that conversation remains confidential, but it is possible that Recchi may want to be moved to a team that will play him. Stay tuned.

Apparently, Recchi will not play tonight against Dallas either.
The 39-year old native of Kamloops is almost finsihed his career. He is making $2 million this season. What would you think about Dave Nonis acquiring Recchi for a Cup run? What would you give up to get him? I'd say Jannik Hansen and a 2nd rounder.