Share All sharing options for: Liveblog: Avs and Canucks

I'm not sure where he went to, but I will once again give a mighty shout out to the guy behind Divealanche.com. Come back soon. But in the meantime, I will borrow his work: 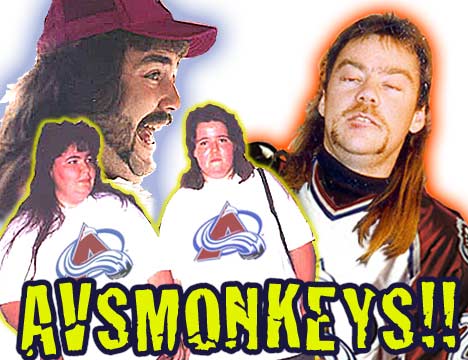 Who knew how appropriate this would be come 2007?

I have to stop watching HBO now. No matter, Galaxy Quest doesn't really hold my interest too much. Save for Mrs. Weaver and flopping around. God bless her.

At any rate, Alanah from Canucks and Beyond will be helping out tonight so my sorry ass isn't alone. That's why we love her folks.

19:00: It's the Avs best start at home since they escaped Quebec. Awesome. Let's see what this utterly green Canuck D can do. Nazzy is playing with the Sedins...this should be fun.

17:40: We have a Linden sighting! Viggy is juggling the lines like he's drunk. Good, we have something in common. The good news? The Canucks haven't been scored on yet. Take THAT conventional wisdom.

15:13 (Alanah) - canucks aren't looking horrible. but Statstaneetsy and Svahtoes scare me... Nice to get the first penalty, canucks. Consistency is key! (ugh)

14:00: Told ya the Avs were waking up. Myspace takes a crosschecking call, so the Avs get the first shot on the man advantage.

12:02: Fuck. One of the Sedins takes a hooking call after Lui basically killed the first call. The Avs go back at it. On the plus side, Luongo is looking solid so far. Don't ask about the offense. Instead, I will tell you I have some metal ringing in the background...right now it's Ozzy's "Shot in the Dark". See? Fate says the Avs can suck it.

Wow, Matt Cooke is all over the place.

10:00 (Alanah) - WOW. maybe we should keep taking penalties. We look better missing guys then with 5 skater!

9:40 - The Holy Trinty of Swedes combine to allow Daniel to get his sixth of the season. Somehow, despite the penalties, the Canucks take the lead 1-0.

8:30 (Alanah) - Jim Hughson just said the players getting hurt was "the slap in the face the Canucks needed". Too bad we can't slap this team around with less damn bloodshed.

(GAMENOTE: Alanah and I agree: this game is all about "plugging the spunk". Don't read into that. Just nod and say "yes, that makes sense".)

6:00 - Doh, here comes the requisite "Smyth is so darn wonderful" lovein. Sounds like time to get more whiskey to me.

3:55 - Colorado storms the net, runs over Luongo and Smyth takes a call. Good. A 2-0 lead into the intermission sounds fine to me.

3:15 - Canucks are zip for their last 11 powerplays. Christ. Bourdon and Edler are out manning the points...it's Twilight Zone time.

0:40 - I agree with Hughson. The Canucks forecheck looks far better then I have seen it in previous games. Best quote of the night? "If you have a heartbeat and can walk, you're in [as a Canuck blueliner]".

0:00 (Alanah) - FINALLY... a fun opening period: A one-goal lead, the team's "pluggers" looking "spunky", a sharp penalty kill and a not-horrible powerplay. It's almost like Vancouver decided to put a hockey team on the ice tonight. Encouraging.

0:00 - I agree with Mrs. Alanah. And Sammy Hagar is in the background playing "I Can't Drive 55"...not sure how that's relevant to the game, but perhaps it's suggesting the Avs time in the drivers seat in the NW is coming to an end? Sure, why not? I can't drive 55 either...thank you sir Hagar.

19:20 - Canucks start off giving up a two-on-one and Luongo was aggressive with another save. He's playing like he's pissed (gee, why would that be?).

18:00 (Alanah) - Liking Luongo tonight. Wonder what all those losers are doing tonight, the ones that jeered him at GM Place the other night? Any theories, Yankee?

18:00 - Yeah, they're at home taking a break from Second Life to cheer him on now. Idiots...to boo a guy who replaced Cloutier is just the definition of stupid.

14:33 - The radio is now playing Zebra's "Who's Behind The Door". I have nothing solid to contribute to that, just letting you all know I am still searching for meaning in the songs I hear. In the meantime, the Canucks started this period strongly just as they did in the first. Seems like Vigneault is keeping the Sedins and Naslund together.

12:40 (Alanah) - Canucks are starting to lose faceoffs again suddenly... and now a penalty kill. Should we be afraid? (Nah. Got Beer!)

11:55 - Luongo is well in his zone tonight. The Avs rushes keep coming and he keeps turning them away....feels like last year with this team nursing a 1-0 lead.

10:38 - Good lord, Whitesnake is on. "Once Bitten Twice Shy". Acoustic too. I feel like, with this bad song on, it's a bad omen...'Nucks on the man advantage for another minute...

9:00 - Chuck another mullet in the box. Hannan holds Hansen (say that three times fast) and the Canucks have a great advantage for 25 seconds.

8:00 (Alanah) - Sweet geezus, it'd be nice to score a powerplay goal... NOT giving up the puck shorthanded with a 5-3 advantage. (I liked this game more in the 1st when the Avs looked half asleep.) Fu#k.

6:30 (Alanah) - There's something wrong when I actually look forward to my team taking a penalty. They just look so much better when there's less of them on the ice. Weird.

6:00 - Canucks are being outshot 10-2 this period. See, that's how a Finger scores shorthanded on you. I feel like no team rolls over and plays dead in the second period better then this squad. That mountain air must be mighty thin tonight...

4:30 - Sauer to the box for delay of game. You know what else is a delay of this game to me? Hearing "Long Way To Love" By Britny Fox...ugh. Radio sucks. Go Canucks!

3:50 - ...and as the radio flips to Rush's "Big Money", Daniel Sedin keeps the play alive and Morrison dumps the puck into a wide open net. 2-1 Canucks. GO BIG MONEY!

2:34 - Canucks take a too many men on the ice and give the Avs a great chance to jump back into the game. Luongo's earning his (massive) paycheck tonight.

0:00 - A huge scramble ends another period in which the Canucks somehow come out with the lead thanks, pretty much, due to Luongo's strong play. 20 minutes separates this team from a huge victory in righting their listing ship.

0:00 (Alanah) - I figure the 2nd period is our own personal episode of 'Survivor'. And we did. So now we're homefree. No problems now; no problems at all. Canucks will win for sure now, a slam dunk, I say. Time to open open the champagne, right? RIGHT?

0:00 - How pathetic is it that popping the cork on some bubbly just FEELS right?!

2nd Intermission Note (Alanah) - Is it possible CBC could be providing the score updates in a slightly less confusing spot than right next to the current score of the game we're watching? Have they been doing this all season? Is this as challenging for sober people as it is for drunk people?

19:48 - Time to kill that Colorado home winning streak. Let's see if the Canucks fall asleep or take it to 'em.

19:00 - Naslund keeps the puck alive, Pyatt drives to the net and Kesler jumps in to flip the puck over Budaj's leg. Vancouver goes up 3-1.

16:27 - Another key quote from Hughson: "This is the most this team has looked like the Canucks from last season all year". Pathetic as it is they have looked great tonight. Luongo especially. Any of you idiots who booed him last game I hope are at home feeling like chumps.

15:40 - Noted FA Isbister takes a holding call and the Avs, once again, will be handed a chance to jump back into the game. Christ I hate Vancouver penalties that scream laziness. Isbister? Laziness? Nooo...

15:01 - Damn, a kickass pass from Stastny to Svatos and he sneaks it by Luongo. Thanks Isbister, thanks for showing up. Thanks. Ass. 3-2 Canucks.

13:50 - Robert Plant is singing to me now..."Little by Little"...honestly, the songs really are on the mark tonight. And the lesson we've learned ? If you hear Whitesnake, please duck, cover and roll to protect yourself. Seriously, they're like napalm.

12:00 - Ahhhh, the tension of a late third period one goal game. It's good to have you back, thank you Vancouver.

11:00 - (Alanah) - Quit complaining, Yankee. You could be a Wings fan. And sure, it would be easier on the heart, but remember: fear builds character. (And have you ever met a Wings' fan with character? I rest my case.)

11:00 - Mrs. Alanah I am focusing on hating the Avs right now. I cannot divide up the hate unless necessary. Right now it's all about the Divealanche...and, on that note, Brett Clark just did that. Jackass. (so did Sedin a little bit, but whatever).

9:45 - Another good point by Hughson: who's been on Sakic all night? Up and comer Edler. Take note please Bourdon, you're lucky you're +1 tonight.

7:50 - Alanah was talking before tonight about how good Ritchie looked. I countered by saying Cooke looked good. So what happens? Both players strip the Avs of the puck in their end, drive to the net and force the Avs into a holding call. Canucks to the man advantage for two minutes.

6:00 - So is Smyth's main weapon that he blindly crashes the net? I guess with that hair it can be confusing...sort of like "what fell on me, what smells and why is their hair everywhere?". Oh yeah, the radio? It's playing "Lay Your Hands On Me"...so someone's taking a holding/obstruction call before the game is over.

3:31 - Just for fun, any Vancouver fan out there missing Cloutier still at all? Naa, I didn't think so...

1:34 - The Avs pull the goalie and Daniel goes for the trick from the Colorado blueline and misses. It's over, the Canucks did it...can they get the empty netter is the last question.

0:10 - Ooof...Svaotos nets his second. Stastny and Svatos are simply badass together and make the Canucks pay again. 4-3 Canucks.

0:00 (Alanah) - Okay. Well, I think that game was Luongo's way of saying "You're gonna boo me? Fu#k you, Canucks fans." And I approve. (Plus, I think a new tradition is born -- ANY sign for optimism by the end of the 2nd period and I'm all about cracking champagne. A good idea on so many levels.)

0:00 - I kid you not, the radio's going with Damn Yankees (snicker) "High Enough"...as in take your altitude advantage Colorado and stick it where you flawless home record can go...I think the radio saved us tonight. Plus Alanah and I helped too. Mentally of course, but that still counts.

The Canucks did exactly what they needed to do tonight: come out aggressive, got their forechecking going and received a strong game from the back (Lui) to the front (the Sedins). Tonight felt a ton like half of last season - the Canucks playing strong with Luongo keeping them in it (or bailing them out) to the bitter end.

Edler and Hansen I felt played strong games whereas Bourdon was invisible again, but you have to feel this win is simply massive for a Vancouver team desperate for something positive. The pluggers tonight - Cooke, Ritchie et all - were strong as well. Honestly, all things considered, if they play like this the next 68 games, they'll be fine and then some. Consistency is the key.

They don't play for nearly a week, but congrats guys, take a breather and have some Fat Tire. Thank you to Alanah one last time for keeping me company.

One last thing: if you dared booed Luongo in the Nashville game and watched him tonight, send him an e-card apologizing. Please.