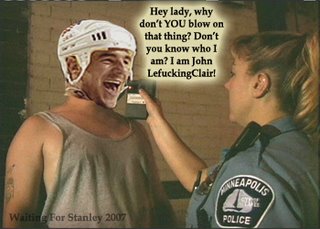 Ah shucks, John LeClair has been busted for a second time for drunk driving. The incident happened on October 24th, probably right after he found out Lindros was retiring. He couldn't handle the grief and decided to drown his sorrows in some alcoholic suds. How far the Legion of Doom line has fallen.....
In all seriousness, this story even surfacing is lame. I don't give a flying fuck how many impaired charges any player has. I'd rather see this tabloid journalism taken out of hockey altogether.
Well, it does give me an excuse for putting together a Photoshop of the occurence.

Personally, and I know that the vast majority will disagree, (and I don't care), getting caught sucks. Do I ever drive when I'm over the limit? Hell yeah!
I have no shame. To me, there's a line. I don't drive plastered out of my skull and can hardly walk even. I do drive when I've had 1 or 2 at least too many that puts me over the "legal" limit.
Of course, I do this less now because there are so many roadblocks and the penalty is quite steep if you get caught.
But it is somewhat unjust in my opinion. I'm not an erratic driver when I'm sober, or when I've drank too many. You see, I think, the majority of the time, it's those pedal-to-the-floor, erratic, impatient, immature, showoff drivers that really shouldn't drive drunk. The booze only enhances that behaviour. I believe every single friend of mine (or acquaintance) that has crashed their car when drunk or died from such an accident was a crazy driver to begin with. I'm serious.
So yeah, I don't like the impaired limit and I think that most of the time it's the jackass drivers that ruin it for everyone else.
So hang in there, Johnny-boy. And stop getting caught!
You want to disagree with me? Go right ahead. I'm all ears.