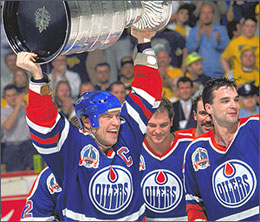 There is no love for Messier in BC. There is mostly hatred for Messier amongst Canucks fans that stems from Mike Keenan ushering in Mess in July 1997 and the craziness that ensued with the team afterward, like Messier being awarded the captaincy immediately, and the trading of the beloved Trevor Linden in February 1998. The team went even further into the pooper after Messier's arrival. His floating around the ice was a sight not to behold.
But I can still remember how I felt when he was signed as a free agent. I was ecstatic. I could swear good things were going to happen. I didn't even care that Linden was traded away. I didn't have the same affection for Linden that most die hard Canuck fans have because I was less of a fan of the team back then. Plus, what Mike Keenan got in return for Linden was amazing: Bryan McCabe, Todd Bertuzzi, and a 3rd round pick that turned out to be Jarko Ruutu. McCabe was later traded to the Hawks so we could draft the Sedin twins together, and Bertuzzi had a couple great seasons and was later flogged for Luongo. I fail to see where any bitterness over the trading of Linden still applies here, besides maybe the treatment of him at the time.
So it's easier for me to accept the 3 year Messier experiment as a failure as far as the team's record was concerned. Strangely, Messier never regained his offensive form even after the Rangers signed him away from the Canucks. The season prior to the Canucks signing him, he had 84 points in 71 games.
But all this crap aside, I have always been a Messier fan. He was a feisty skilled player and leader. I didn't mind his use of the elbow to knock guys out. Hey, Gordie Howe did it too. The Moose was to be feared if messed with.
His offensive numbers in the regular season and playoffs are mind-boggling. 1887 points in 1756 regular season games. 295 points in 236 playoff games. A playoff monster.
He took the Oilers team by the balls when Gretzky was traded away and performed admirably winning the Cup without Wayne in 1990 staying on a line with Glenn Anderson. His dominance in the 1994 playoffs was phenomenal. I wonder how much (or any of) that plays into Canucks fans' minds in their hatred of him.
Who knows. I don't care. I respect the guy's accomplishments, even though he cries too much during big honorary events.