Share All sharing options for: Hartnell hit on Alberts 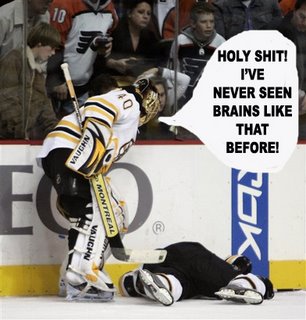 Hey I love violence in hockey. But I don't like these kinds of incidences where a player is vulnerable on his knees along the boards and someone crunches him. Such is the case in the Bruins/Flyers game last night, as Scott Hartnell smoked Andrew Albert's prone body and especially head into the ledge of the boards at the bottom of the glass.
I'm sure the League is reviewing it and Hartnell will get an Ohlund-type suspension, or maybe a bit less. It's intent to injure, even though Hartnell is denying it.
Another problem here, and I'm sure Don Cherry will be barking about it on Saturday: can something be done about the ledges along the boards? Can we pad them up or eliminate them altogether? I'm surprised this kind of incident doesn't happen more often.
Alberts was apparently fine afterwards, even though he layed on the ice like he was dead. So I'm sure Hartnell, with a clean track record (?) may only get a slap on he wrist.
It's just disturbing that the last time these 2 teams played, Patrice Bergeron was boarded by Randy Jones and may miss the rest of the season, and now this. Stupid goon Flyers hey?
Hartnell should have let up. Check out he clip. It's 1:11 into the highlights.