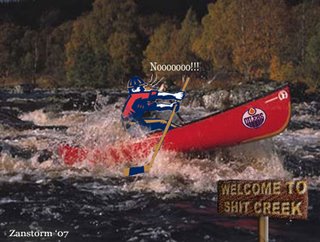 I am going to keep this short and sweet as I am busy at work. The Oilers are coming off 3 losses in a row coming into Vancouver tonight, all to divisional opponents. The Canucks are coming off 3 wins, all over divisional opponents. So do the math. The Canucks' last win was at home, something they had not done for a while. The Sedins are hot, baby.
Vancouver looks to have their game back and I expect a win tonight. Let's say...5-3.
The Oilers are damned quick though....and young. So the Canucks will have to slow them down with their difensive prowess and frustrate the Coilers. Expect a wild and physical affair.
Is Jeff Cowan ready? If he is, he may take Linden's spot.
When is Jannik Hansen going to score? He's overdue because his effort is there.
An interesting stat from Canucks.com...the Oilers have not won a game yet this year when trailing after 1 period. Wahahahaha!