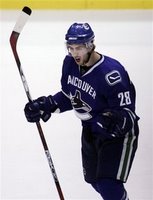 It appears that the Sportsnet's Hockey Central Panel is fucking blind. They accused Mattias Ohlund for slashing Mikko Koivu simply because Koivu took the puck from the Swede and danced around him. But they clearly missed the elbow that Koivu threw on Ohlund's face as he went by him. It doesn't justify Ohlund's actions. But I sure hope Ohlund doesn't get too long of a suspension.
Anyone else get a Bobby Clarke-Kharlamov deja-vu from that slash?

What a game though. Nothing beats seeing the Canucks destroy someone. To me it seemed it wasn't as much as the Canucks were so damned good as it was the Wild played THAT badly. Where is the Wild's defensive system lately?

-Ryan Kesler. He shadowed Gaborik and neutralized the bastard. Gabby was so pissed off and frustrated that he dished out a serious elbow to Kesler's face. Kesler just skated away.

-Trevor Linden gets his first goal of the year.

-Luc Bourdon gets his first ever NHL goal. The chants of "Luc" rang through GM Place. That was a feel-good moment.

-The Wild can be feisty and dirty. They are frustrated evidently. Boogaard thinks Ohlund should get 5 games. I think Boogaard should shut the fuck up and get a lobotomy. Ohlund's golf swing is being reviewed by the League right now.

-6 Canucks goals by 6 different Canucks is a thing of beauty though. And it looked even better watching it in High Definition.

-Alex Edler is getting better and better. He was huge last night. Loved that hit on Boobaby.

Ilya Bryzgalov signs with the Coyotes, huh. Well the Dogs were 3rd on my list for Breezie destinations. His impact in Phoenix was immediate as he and his new teammates shutout the Kings 1-0 this afternoon. Wow. Gretzky gets himself the best goalie he's had yet. Should be a lethal shot in the Coyote's arm.....if they can learn to score more.