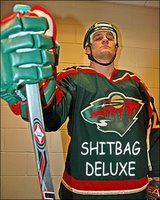 Let's get ready to ruuuuuummmbllllle! 3 periods of fighting coming up tonight.
In the red corner: standing at 6 feet 7 inches tall and weighing a colossal 270 pounds: he is the freak, the frankenstein, the disgrace to Dutch people, the gum-flapping mindless tit, the slow-skating goon, the waste of roster space, the personality of a shit sandwich fighting champion of the NHL! Derek "Boogeyman" Boogaard.
In the blue corner: standing at 6 feet tall and weighing in at 210 pounds: he is your average Vancouver Canuck! Run away bitches! Run!
Ah, it should be a heated tilt tonight after last week's tempermental game. Boogaard was unhappy with Canuck players taking liberties with the Wilds' star players. After that game he said:

"Their so-called agitators were taking liberties," Wild enforcer Derek Boogaard said. "As soon as I stepped on the ice, they just sort of spread out and scattered to their holes almost. They don't want to come near me or talk to me.
But they think they can slash and stick and punch our skill guys. I'm not going to stand for it. Maybe I can go after, or check Naslund and those Pinky and the Brain twins."

Comical stuff from the doof. But I wouldn't put it past him.
The thing is, he's wrong and off base. Kesler was checking Gaborik closely and shadowing him and Gaborik reacted with an elbow to Kess' face. Koivu elbowed Ohlund in the chops right before Ohlund cut that useless piece of Finnish timber to the ground.
This game could get interesting. But what Canuck is going to stand up and get Fedoruked? Cowan? The newly-inserted Mike Brown? Maybe they both can double team the giant and give him a finishing move. I can see it now: A double clothesline, then Brown drapes Boogaard over his knee while Cowan climbs to the top of the boards and delivers the elbow....Demolition-style. 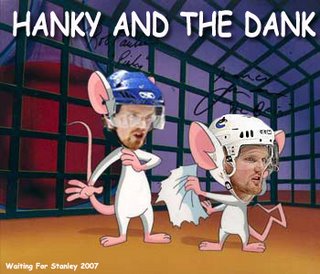 The NHL is going to be watching this game closely.
Our best bet is to get Cowan and Brown to drop the gloves with Boogaard individually, take some licks and then have Boogaard ejected for his 2 major fighting penalties. And they should get it done early too.
Should be a face-slapping slash-a-thon.
I say the Canucks take it 3-2. The game probably won't be that violent. Not enough goons out there.
And since I don't aspire to be a politically correct journalist: mother-fuck Boogaard. Millions of sperm and Boogaard's survived? Someone should slap his mom for even giving birth to him. I'm pretty sure his parents are apes.

Game time: 5:00 PM
TV: Canucks PPV. This one could be worth your money! (minus Gary Valk and the repeated Linden tributes.)