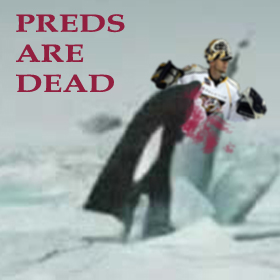 A few notes from Canucks.com:
-Mayson Raymond's demotion is probably not short term as he has been sent down to "develop"
-Jannik Hansen has been called up. I was impressed with his play last season as he was a pretty creative player. Of course, a lot of that creativity was with Jan Bulis. Those 2 were fun to watch on the PK especially. Hopefully Hansen sticks.
-Jeff Cowan, who has been out with a hip flexor injury for a while now (since the back-to-back games against Edmonton) looks to be ready to go.

"Cowan skated fine today and if he skates the same way on Wednesday, then he’s definitely going to play," said Vigneault on Tuesday.


-It could be Trevor Linden who gets more icetime with the Sedins against the Predators, but that depends.

"My intentions are to try him tomorrow with Daniel and Henrik," said Vigneault. "Now, depending on Jeff’s (Cowan) status tomorrow (Thursday) morning, that might change, so at this time that’s what I foresee. Things quickly changes in this ugly business, we all know that."

I guess that means the Sedins-Isbister trial is over. Why not play Pyatt with the Sedins full-time? Viggy must like Taylor's play on his current line.
If you thought the Canucks were inconsistent, the Predators are even more-so. They have won 2 of their last 5 games, as have the Canucks, but the Preds' scores are what's crazy about them. Gone is the powerhouse Preds of the previous years. Now they tend to get blown out when they lose. Their last game was a 5-1 loss to the Flames where they looked atrocious.
They also have not won on the road yet this year, and have won their 4 games at home.
The Preds do not have all cannons firing. Jason Arnott and David Legwand lead the team with 8 points in 11 games. Alexander Radulov, who is supposed to carry a lot of the offence this year and maybe even breakout, has 7 points in 11 games.
The Preds' special teams is ass:
Powerplay: 24th overall.
Penalty Kill: 25th overall.

I like our chances. Last year we'd cringe at the thought of playing Nashville. Now, they are almost easy money. Then again, aren't the Canucks the same way?
Fuck it. 4-2 Canucks.

GAME TIME: 8:00 PST (??? Is there figure skating at GM Place tonight?)
TV: PPV??? Which jackass do I have to kill for putting this game on PPV? At least it's the last PPV game until December 20th.