Canucks-Oilers:Period-by-period (Oilers 5 Canucks 4 in a shootout)

Share All sharing options for: Canucks-Oilers:Period-by-period (Oilers 5 Canucks 4 in a shootout)

The Oilers played a massive tenacious 1st period and were rewarded with a 3-1 lead. I'd say the Canucks need to slow them down somehow, but first they have to be able to keep up with them.
Even Alex Burrow's shorthanded beauty breakaway goal couldn't stem the tide late in the period as Horcoff bagged a PP goal just afterwards. The Oilers came into this game last in the NHL with the man advantage. You couldn't tell here tonight. They have 2 PP goals already.
This looks bad if the Oilers don't let up a little. They have all the momentum right now. And Garon looks just as sharp as he was the last time we played them.
The Canucks are last in the NHL in faceoff wins and that is very evident now, as we don't want to be giving the Oilers too much puck possession....or to many powerplays either.

-I think Oilers fans are going to feel violated after the 2nd period, as the Oilers outshot Vancouver 14-4, continuing their ferocious attack, but it was the Canucks who scored 2 goals in the middle frame.
-Roberto Luongo was magic to say the least. That glove save was sweetness, baby.
So was Brad Isbister's goal: upstairs, where grandma keeps the peanut butter, as Don Taylor would say.
-Edler's goal was just flukey, but we'll take it.
-Enough with the penalties already!! The Canucks have taken 6...the Oilers...ZERO. 2 calls on Van (on Krajicek and Mitchell) were phantom calls in my opinion.
-Hopefully the Oilers fall apart in the 3rd and the Nucks tear them apart. But you know they won't roll over and die. Should be a great finish. How the hell are the Canucks even in this one??? Blows my mind. When you're rolling...

A night of pretty goals as both teams notched 1 each in the 3rd.
How unfortunate that Edler put the puck over the glass for the delay of game. We just may have won this one in regulation.....
Now for OT....

Nothing solved. The Canucks had the best chance and outshot the Oils 4-1.

The shootout went 5 rounds and that damned Horcoff salted it away with a perfect shot in the left corner, along the ice.
-what a miraculous save by Luongod on that one 'what's his nuts', and then Linden followed up with a goal. It felt good didn't it.....until Hemsky made Roberto look silly, Naslund missed, and Horcoff finished it.
What a game.
We hardly deserved even a point in this one but we at least got that. Good enough for me.

Hats off to the Oilers for giving the Sedins a hard time and keeping them off the scoresheet.
Hats off to Garon, who still looked great.
But a huge hats off to Luongo, who was superb. 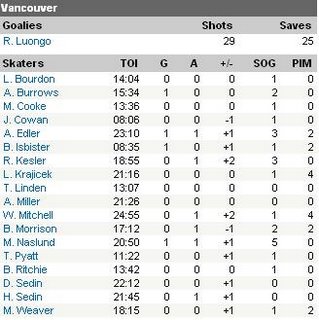