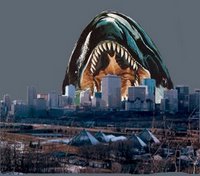 The last time the Oilers and Canucks played was on the 14th and Ales Hemsky broke our hearts with a shootout winning goal. It was a great 1-0 game...far from boring. Luongod and Garon were stellar. I wonder if MacT goes with Garon tonight. He'd be smart to do so. Since that night, the Oilers have lost to the Wild and Flames, and on the exact flipped side of that, we beat those same 2 teams.
Mike Wilson was called up from Manitoba yesterday, but isn't expected to play until Wednesday against Minnesota. Wilson is more of a goon...so you know the Canucks are all about "muscling the Wild". Can't wait.
Luongo will start tonight, and Curtis Sanford will play against the Wild.
Sami Salo is expected back sometime this week with a full protective mask on.

Should be a beauty. I say the Canucks get their revenge tonight and win 3-1.