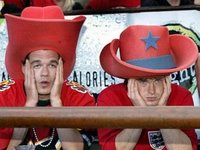 The whooping of Minnesota came at a cost, as Mattias Ohlund has been suspended for 4 games for his golf swing-slash of Koivu's leg. This puts the Canucks in a bit of hole on the blueline. Ohlund's play has been so damned good lately that his absence will hurt. By the way, Koivu is slated to miss a week because of a cracked bone in his leg. I don't feel bad for the punk.
I have no idea who's in for Ohlund tonight.
The Canucks are rolling. The Flames are getting there, winning their last 2. They had dropped the previous 3 games.
What about tonight's outcome? I can't wait to see Bourdon and Edler step up as they are the going to get increased minutes. Look for a close game and I'll say we take those Flamers 4-3. I also predict Mike Keenan eats about 200 ice cubes tonight.