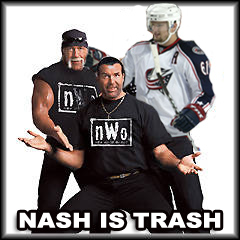 It's hard to imagine seeing a better Canucks game than what we saw against Anaheim. The Jackets are a hot/cold team now. The Jackets are coming off a 3-1 loss to the Oilers Monday night. They have won 2 and lost 3 in their last 5 games. The Canucks are better, winning 3 of their last 5 and now coming off 2 shutouts by Roberto Luongo.
A big plus for us is that the shutout master Pascal Leclaire injured his hamstring against Edmonton, and so Fredrik Norrena will play for Columbus tonight. Norrena's stats are not that impressive this year.....

The Jackets are 3rd in the NHL on the penalty kill.
We are 23rd.

Streaking Jackets in the last 5 games

Streaking Canucks in the last 5 games

Man, I am loving the play of Ryan Kesler lately. Sure, Naslund is cooking too. But Kesler is so gritty and a great checker as well. He's an all-round player. 2 words: CONTRACT YEAR. Don't matter. Kess is proving to provide great secondary scoring and I fricking love it. I'm crowning him King right now. He's the Jan Bulis of last 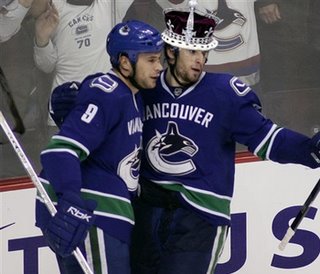 So what about tonight's game?
Let me make a guess. I'd say it will be more of a boring style as we have 2 defence-first teams under Vigneault and Hitchcock, playing tight and waiting for the other team to screw up. This game could be decided especially on special teams due to its tightness.
Well, we do have Kesler shadowing Nash.....so we should be fine in 5-on-5 situations. Hopefully we can stay out of penalty trouble. Leave the rest to Luongod, who is on a tear right now.
I say it's going to be close. 2-1 Canucks.