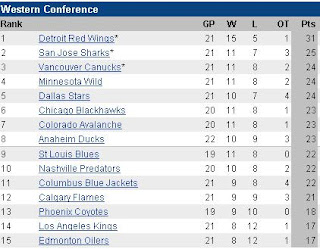 Well, I'd say last night's game did not live up to the hype. Mike Brown fought Voros early in the 1st period and the rest of the violence never really materialized. The first period was more wide open than expected, with both teams scoring twice, but then they clamped down defensively in the 2nd and 3rd period. The Canucks didn't really disrupt the Wild too much physically, but played their game and won 4-2 in solid fashion.
I'm loving Kesler's end-to-end goal still. He is bringing it this year and earning all of his $1.9 million.
Naslund's hatrick was a thing of beauty as he tied Tony Tanti for the all-time Canucks leader in hatricks at 10. Nazzy has his game now, and is finally clicking with the Sedins. Fun to watch.
Almost as enjoyable, was seeing Boogaard get next to no icetime at all. He played 3:53 total and sat on the bench for the whole 3rd period. I laughed. I guess Lemaire didn't want to start a riot, or was encouraged not to.
More comments from Wild and Canucks players prior to last night's game from the Star Tribune:

-Gaborik (in reference to why he elbowed Kesler last week):

"It's not like I'm doing it every game," Gaborik said. "It was kind of a one-time deal. ... Guys like Kesler, Cooke run around, especially Cooke. He's always chirping everyone. In [the 2003] playoffs, he was just doing stupid things. He's just like that."

"He runs around, he tries to hurt you, he talks a lot on the ice -- too much," said Bouchard, who's not friendly with Burrows despite them skating together during summers. "Sometimes he just says some stupid stuff, and I know a lot of guys ask him to [fight] and he doesn't want to go."

Yeah, that's the agitator's role, dumbass. Esa Tikkanen made agood living out of stuff like that.

Boogaard had flapped his gums even more, as I had noticed on the Canucks.com boards:

"The egos those guys have are sad," Boogaard told the Minneapolis Star. "Pretty soon, it'll catch up to them, whether it be this year, or next year, it always does with those kind of guys. I mean, it caught up with Kesler. You watch the clips of the Boulerice thing [Flyer Jesse Boulerice was suspended 25 games for cross-checking Kesler in the face on Oct. 10], you see Kesler hooking him and slashing him before it happened. And obviously there's just a time when you snap. Boulerice did. It's bad, but I don't feel sorry for Kesler. I did before, but hearing these comments and seeing him play on Saturday, he's just a bad guy."
Boogaard also took a swipe at Canucks' coach Alain Vigneault.
"That's almost a point for me that they feel they have to call somebody up to look after me," Boogaard said. "It's funny, the [Canucks] said last year they don't like tough guys and don't need a tough guy. Obviously, they feel they do now for some reason. I don't know why."

I see Boogey is up on his history. As for the rest of his rants I say: STFU blockhead.

As you can see, the Western Conference is a dogfight. The Canucks are now assuming their rightful place on top of the Northwest Division and hopefully can stay there. They are playing well and have all but erased their terrible start. It will be interesting to see how the team reacts when Salo returns this week. They've played so well in his absence. Salo had better "tow the line."
Bourdon and Edler continued their improved play. What a great positive this is for the Canucks.
Capitals'upper management has finally had enough, and fired Glen Hanlon today. Bruce Boudreau will take over as interim head coach. The Capitals have been sliding for a while now and have hit rock bottom in the Eastern Conference AND in the NHL with a dismal 6-14-1 record.
I put some of the blame on GM McPhee as well. He continues his cheap shopping in the summer and gets the often-injured Tom Poti, along with Nylander and a horribly inconsistent Viktor Kozlov. I never liked those additions and am not surprised by the Caps' fate right now. (sorry Ted)
I'm going to miss those post game interviews with Glen Hanlon though.....hahaha.
Much heat is coming down on the Leafs' brass, and especially coach Paul Maurice, as the team continues to be inconsistent. Today, Bryan McCabe defended his leader.

"It's silly," McCabe said of recent suggestions that Maurice's days might be numbered. "There is absolutely nothing wrong with Paul or any of our coaches.
They have us prepared every game. Our practices are as good as they've ever been.
The blame is 100% on us, the players. It has nothing to do with the coaches."

Yes, McCabe it IS yours and the players' fault. Unfortunately, it's the coach that gets fired first when the players tune him out. A public statement of defence won't stop that.
The Leafs are currently in 10th spot in the East with an 8-9-5 record. They are struggling with consistent team defence. No surprise there. I've been saying that for years.