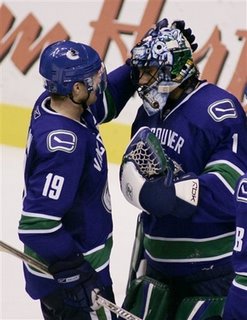 "They were firing everything at the net and I was able to challenge the shooter every time," Luongo said. "Luckily there was no backdoor plays or stuff like that and no rebounds so it makes me much more comfortable knowing that I can focus on the shooter.

Luongo was stellar tonight as was the rest of the Canucks' team, shutting down the Ducks 4-0 in what was more of a revenge match than Bertuzzi's returning. In fact Bert's returning came and went with little hooplah as he was rendered useless as was the rest of the Ducks team, who was stellar in period 1, outshooting us 15-5. But from that point the Canucks took over, outshooting the Ducks 28-11 in the last 2 periods, mostly because the Ducks took so many penalties.
4-0. How useless was Big Bert? 0 goals 0 assists 0 shots on goal and a -2 on the evening.
Sad, really. Luongo stopped every Duck opportunity in the 1st period and then the Canucks came on...slaughtering the Ducks 4-0 in what was a revenge ass-kicking more then it was Bertuzzi's home-coming. Kesler had 2 goals.
I hope Earl Sleek was dooped after this one. The Canucks made the Ducks pay.

I have some home video taken from my cell phone that I will post tomorrow. Sleek won't like it, but I'm not asking him to! 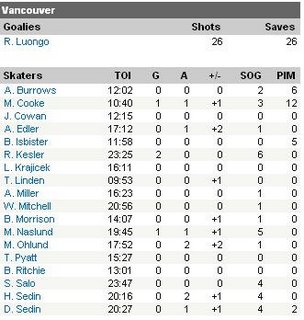