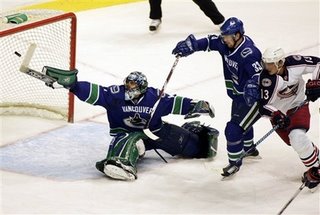 This game kind of delivered as planned: tight defence, with the Canucks winning 2-0. Luongod was god again, and now holds the record for the longest shutout streak in Canucks' history. From Yahoo sports:

Luongo, who had consecutive shutouts three times with Florida, passed his personal best of 182:37, set with the Panthers in 2004, in the third period. He then eclipsed a 32-year-old franchise record of 184:20, moving past Ken Lockett, a backup who played 55 games over two seasons and set the mark in April 1975.

Luongod had plenty of help from his teamates, who played very well in front of him for the most part, which he acknowledged post game.
It didn't come down to special teams at all, besides PK. The Canucks did not score on the powerplay (0-for-4), but got both their goals from defencemen pinching in: Ohlund and Krajicek. I guess Ohlund misses the net so much he may as well try deflecting the puck off a skate. Adam's Foote put the Jackets down 1-0 and the Canucks never looked back.
Luongo was especially superb in the 2nd period, when the Jackets outshot the Nucks 15-6.

Rick Nash was all over the ice and had 3 shots, but was kept in check.
A sound victory for Vancouver as they continue to roll.

-How funny was it to watch that goon Boll miss his check on Krajicek and crash into the boards? Classic foolery.

-Is Jeff Cowan really all that necessary to have on our roster anymore? He isn't scoring or even coming close and he is a lousy goon who looks outmatched every time he fights. Mike Wilson, however, seems to have the fighting goods, plus the hustle.
I think Cowan is expendable right now...sorry bra-barian.

-Markus Naslund was great again even though he didn't score. What are this guy's plans in the future? Is this his last year, or is he over-playing in a contract year to maybe re-sign here or somewhere else? Expect the latter.

-Does anyone miss Kevin Bieksa? I don't. The team is playing so well without him. That's not a bad thing.

-Isn't it kind of sad that no Canucks goalie has ever had 3 consecutive shutouts until Luongo achieved that tonight? 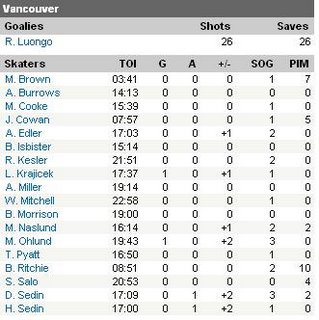