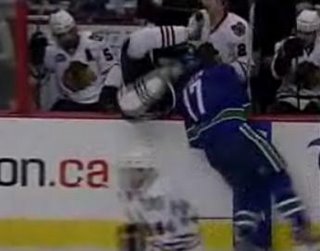 "That was a pretty easy one," said Morrison of his winning goal. "They have to respect Sami's shot and he made a great pass. Sami's friendship dues are in the mail."

That was a sweet play indeed.
Tonight's game was decent for a 2-0 game. Vancouver outshot the Hawks 29-27. Luongo and Lalime were terrific. At least Luongo's shutout tonight was a winning shutout, unlike the OT loss to Edmonton a while back.
The Hawks' top line of Toews, Kane and Ruutu looked out of sync, and were kept in check quite well. Kesler made an ass of Kane in the first period by checking him ass over tea kettle into the Hawks' bench. Gad, I could watch that one over and over again.
The one great chance that Toews had was stopped cold by a brilliant Luongo save late in the 3rd period.
I was disappointed by the Hawks' effort. I expected more. But hats off to the Canucks for playing a great game...THEIR game and stopping this Hawks team in its tracks.
-Is Ryan Kesler any good or what? He continues to excel. More honorable mentions go to Matt Cooke for a spirited physical game, and to Alex Edler, who was solid, even saving a point blank shot and preserving the 1-0 lead.
-Good to see Salo is blending in and coming back to form. Ironically, a Salo clearing shot hit Pyatt right in the face half way through the game. Hey Sami, it wasn't Pyatt who broke your nose, it was Burrows!
-A bit of rivalry is now evident between these 2 teams. It was a physical game. Nice to see Lord Byron Ritchie stick up for Luongo and taking on Burish, who had given Roberto a cheap shot.
-So what are we, 7-1-2 in our last 10 games? Still in a rat race in the West.
Next up: Anaheim on Tuesday and Columbus on Thursday. 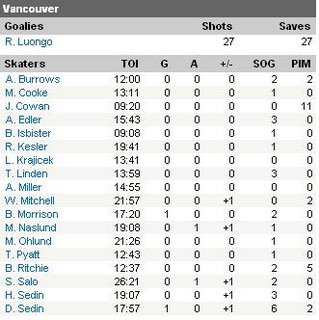