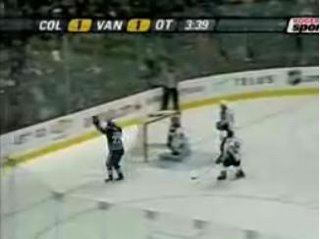 So, I guess the panic button can be put away into a box and stuffed into a closet for now. The Canucks have won 3 in a row now, and even got that elusive home win. The Nucks are 500 now, 8-8-0. They are 5 points ahead of the Oilers, separating the good from the ugly, and in 7th spot in the Western Conference. Holy hell. What a difference a good week makes.
The team looks to be settling down now. The confidence is there. They are playing the system well. And what the hell, the Sedins-Naslund line is dangerous! They are also getting bounces. Hank's OT goal went off an Avalanche player's skate (hint: not point a 'finger' at anyone).
Luongo was super sharp once again.
Yup, we're back on track.

"We got together as a group and we simplified our game a whole lot," said Henrik post game. "We put pucks in areas where we know it's going to end up. In the first 10 or 11 games we tried to force things. We tried to make a lot of plays."


Is it just me or does Trevor Linden look his age out there? The Avs were skating circles around him, making him look like a defensive liability. Maybe that explains his minutes played.
Also, how many shots missed the net tonight? Wow. Both teams were guilty of that. Oh well, it doesn't matter when you win though, right?
The Canucks OWN their division. They are undefeated against divisional rivals. That is a good sign. 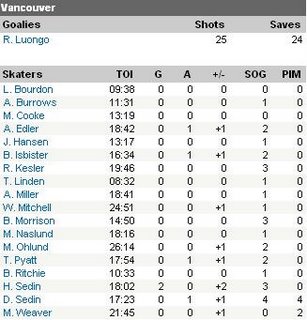