Can we please have some decent competition??

Share All sharing options for: Can we please have some decent competition?? 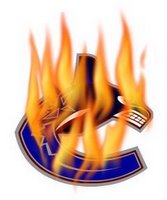 Yeah, it really is starting to come down to that question. I thought both the Wild and the Flames played lousy games and the Canucks kicked the turds out of them for it.
Last night's game against the Flames was another treat to watch because even though the shots were in Calgary's favor (many of them useless shots) the Canucks are having an easy time scoring right now. The Swedish Touch line is providing highlight reel goals lately.
Perhaps Edmonton will be a tougher challenge tomorrow night, as they beat us 1-0 in the shootout last week. Maybe....
But anyone that cries about the Canucks' lack of scoring needs to be silenced right now. This team can score when all 4 lines are rolling....or when the Sedins and Naslund want to do their thingy.
I'm really looking forward to the Wild-Nucks game on Wednesday because of its potential fireworks, and then the 2 games against Chicago November 25th and December 5th. Lovin' the Hawks right now. IT'S ABOUT DAMNED TIME they played this well and got results!
Anyone else thinking we should just let Salo and Bieksa rot on the sidelines? We haven't lost a game in regulation since their departure. Maybe those 2 are bad apples. Or maybe the team needed some adversity so they could rally around it.

Either way, we are 2 games above 500 and in 9th in the West. Have you seen the standings (rat race) in the Western Conference? Holy mackinaw! Check it out.

A serious pet peeve of mine is people judging goaltenders for getting pulled after letting so many goals in so many shots. Or just judging goaltender stats in general. How often is a goalies' stats relevant to the way the team plays in front of him? Luongo and Brodeur are the best goalies in the NHL. But when the team in front of them played like ass and the goalies' save percentage drops to .880 or less everyone says "yeah the goalies aren't on their game yet."
Fuck off! Brodeur and Luongo for the most part were hung out to dry by their teammates earlier in the season. Now they aren't and their averages are going up. Go figure.

Can someone tell me how the hell it is that Detroit has 5 losses so far and Chicago has beaten them 3 times?! Somebody start watching Hawk-Wings games and start scouting. I'm sick of seeing Detroit on top.