Share All sharing options for: Bert returns to Vancouver tonight 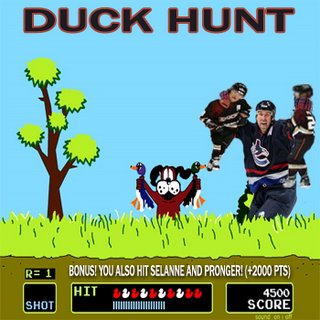 (Just had to post my old Photoshop from the playoffs last season. Yes I know Selanne isn't playing.)

At long last, barring some freak injury (or bullshit excuse to not show up) Todd Bertuzzi is making his return to Vancouver tonight for the first time since being traded. I'm curious of what the fans' reaction is going to be. To boo or not to boo.
I'd boo the bugger myself. Never was a big fan of Big Bert.
As Alanah has pointed out, Bert's return may just overshadow the 'revenge factor' of the game. The Ducks did put us out of the playoffs remember? (Follow the link of the Game 5 clip, get angry!) May the Canucks slaughter them for that! We need some satisfaction from even the thought that it ever happened.
This is a different Ducks team now. Gone are the jackass indecisive Scott Niedermayer and Teemu Selanne. Gone is Dustin Penner to sweat it out under all the pressure in Edmonton. This Duck team is different.
But they are starting to roll. They went 3-6-2 in the first month (plus 2 games in England). In November, they are 8-2-3, returning to form. Kind of reminds me of Vancouver.
Ryan Getzlaf is leading the way offensively for the Quacks with 10 goals and 25 points in 22 games, and a longterm contract at $5+ million per season to go with it. That isn't slowing him down. Corey Perry has 12 goals and 19 points in 24 games for second on the Ducks. Interestingly, Matthieu Schneider has 9 points in 9 games.

Can we beat these guys and gain some revenge? We'd better. After playing so well against the Hawks I think we can do the same against the Ducks because we have more incentive. I say the Canucks take this one 4-2. What does Bertuzzi think of my prediction? 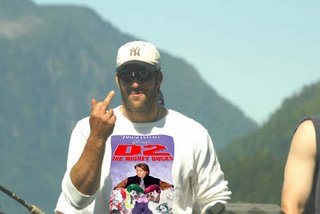 Earl Sleek, one of my faves, has a pre game post up at Battle of California along with a pretty comical image of "the sucker punch". Check that out and spam his sorry ass. :)

**UPDATE**
From The Star Phoenix:

"I think they are going to cheer him, I don't see a reason why they wouldn't," Canucks captain Markus Naslund said of the fans' reaction tonight to his former linemate and current Anaheim Duck, who remains a close friend. "He loved it here, he was one of the best players the Canucks have ever had and he entertained the city for a long time. He has done a lot for this organization."

I don't know, Markus. Could be a mixed reaction tonight. Probably more cheers than jeers I guess. We'll see.
I think he did entertain us, but he also was a loose cannon and a drifter who ended up being a thorn in our side as well.

Bertuzzi met with the media in Vancouver today. Check out what he, as well as his former teammates said at Canucks.com.