#44 returns and brings a gaggle of assholes with him

Share All sharing options for: #44 returns and brings a gaggle of assholes with him 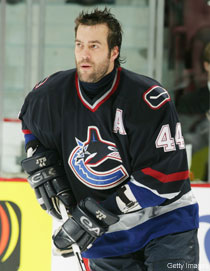 I've laid out my thoughts already, but I'll add some more.

I like Todd Bertuzzi, always have. Sue me. I like Todd even though he's no longer a player on the team I root for. I like him because, when he's on top of his game, he's unstoppable.

My fondness for the guy came at a very distinct moment in a very distinct game. It was way back in March of 2002, before the lockout that would stop the Rangers from doing what they loved best: buying up every player possible. Just a few days before the March 19th game against the Rangers at MSG, they went ahead and snagged Pavel Bure from the Panthers. So I had to watch, in person, the guy who made me start loving the Canucks (Bure) play on the team I hate the most (Rangers) and the only guy who made the transition a bit easier on the stomach was Todd Bertuzzi who notched his second career hat trick at the time and single handily beat the Rangers. I remember that third goal because every curse word in my vocabulary tried to leave my mouth all at once (yup, that's how I celebrate), but that's when Todd became Todd to me.

Sadly, Bertuzzi may never get back to that level again. A terrible year with injuries last year, he started this year with a concussion and just made it back to the lineup last week. It's possible (likely?) that Bertuzzi may have a few more injury-filled years left to play before he calls it a day.

I hope the fans give him some praise tomorrow and remember what he did during his time in Vancouver:

- He could score. A lot. Even the Malik.
- He could hit, hammer and punish others. Jackman knows.
- Likely the key member of the now-dead West Coast Express, a line that produced 718 points in three seasons together.
- He loved his teammates, even if it was strange.
- The unwitting subject of one of the worst songs ever produced.

And since Dan Cloutier will likely never see the harsh light of the NHL again, this is about a big a homecoming as it'll get for this team right now. So give Todd a warm welcome and then, once the puck drops, boo the hell out of this Anaheim squad and never forget Rob Neidermeyer's elbow that helped end this team's run in the post season. (If you need some more laughs, Earl Sleek has ya covered.)

Bold Prediction: Canucks win 4-2. Sedins and Markus go wild and we have a Pyatt making an appearance