Share All sharing options for: Verbal wars: Burke vs Lowe and MacTavish 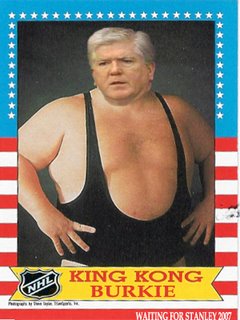 The whole saga over the Oilers signing Dustin Penner at an inflated price just won't go away. Yesterday, Ducks' GM Brian Burke quipped: "If I had run my team into the sewer like that," he continued, "I wouldn't have thrown a grenade at the other 29 teams - and my own indirectly." Burke accused Lowe of being "colossally stupid."
Today, Kevin Lowe and Craig MacTavish fired back immediately. According to the Edmonton Sun, Lowe called Burke an "egomaniac" and a "blowhard". MacT was a little more comical:

"He reminds me of the Wizard of Oz," said MacTavish. "You comb his hair, put a white shirt on, wheel him out in front of the camera and he'll say whatever you guys want.
Clearly it's a crusade of self-promotion on his part. But what goes around comes around in this league."


Apparently Burke also feels that "Penner's 5-year $21.5 million deal will serve to drive NHL salaries up across the board."
There is no doubt that players' agents are going to use Penner's contract as a template. However that is unrealistic to do. Penner's salary is completely unreasonable. Penner's 29 goals and 45 points with the Ducks last season doesn't warrant that kind of money.
So what does MacT mean by saying "what goes around comes around?" Sure, Burke is vocal, and I like that about him. But I don't see him being hypocritical and stealing a restricted free agent away from someone for stupid amounts of dollars. Burke is an egomaniac and a blowhard at times, but I don't see his anger and over this issue as self-promotion. I would be pissed off too. You culture a great young team only to have desperate fools like Oiler's brass steal them from you by waving a wad of greens. I still think Lowe broke a code, in a sense. And the saying "what goes around comes around" applies more to them than anyone else. There isn't going to be a lot of love shown towards them from most of the other GM's I bet.