Should visors be made mandatory?

Share All sharing options for: Should visors be made mandatory? 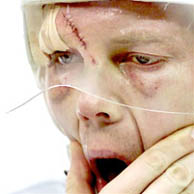 I heard the TSN panel talking about it last night and saw that the viewer poll on the matter showed 58% of fans in favor of making visors mandatory in the NHL.
Well I would have voted no. Does the League really need to make this a law in order to protect it's players? Why should the players be forced to be protected? Isn't that like having to pay car insurance when you've never been in an accident before? I hate paying for insurance. Yeah, strange analogy, but you get my drift don't you?
To throw another analogy at you, it should be like signing a waiver form before bungee jumping or white water rafting. Sign the form and take your chances.
I never liked the concept of forcing everyone to do something because a certain smaller minority either fucked up or had shit happen to them. Not every NHL'er wants to wear a visor. I know in 2005 the issue surfaced and the majority of players voted it down.
Sure, you get the guys who get clipped on or around the eye, get scared and start wearing a visor because they've seen the light. Fine. But leave it as an option for the rest who have not suffered the same setback.
It's a moral issue for me. I would hate to have a visor in front of my eyes. I am supposed to wear glasses but don't for that reason. They fog up and aren't comfortable.
The players would eventually get used to it if forced to wear them, sure. But I say let's get down to the root of the issue and deal with the issue of high sticking, whether it be intentional or non-intentional. (No, I wouldn't know where to start with that one).
Better yet, let's deal with more pressing issues, like hard shoulder pads connecting with heads causing concussions. OK, now I'm just beating a dead horse.

I think Craig Conroy almost said it best a couple of years back: "If I was a GM and I was paying a guy a lot of money, I'd definitely want to make it mandatory," said then-Kings centre Craig Conroy, who does not wear one. "But as a player, I don't think anyone should be forced to wear one."