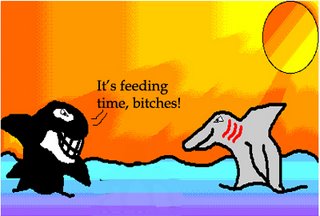 Finally, the Canucks are back in action. Tonight they face the Sharks at GM Place, a Shark team that was edged by the Oilers in a shootout last night.
The Canuck press is experiencing deja-vu. Who is going to provide the offence beyond the Sedins line this season? I say blah-blah no problemo. The Canucks are going to have to score by committee, and I think they have the team that can do just that.
Mason Raymond impressed Canucks brass so much in preseason that he will start the regular season playing on the Sedin line. I foresee great things for this kid already.
The Canucks second line will consist of Ryan Shannon-Naslund-Kesler. This is the line I am most looking forward to seeing play. I am pulling for Kesler to have a great year and score 25-30 goals. I haven't seen much of Shannon yet either. Naslund is surrounded with grit it seems.
That leaves Pyatt-Morrison-Cooke on the 3rd line. Not bad. I want to see more out of Morrison this year. Otherwise I get the feeling he will be flogged before the trade deadline.
The 4th line? Not sure. Cowan-Ritchie-Isbister? I don't have high hopes for Izzy, but it would be great to see Cowan especially re-emerge into a sniper. But they aren't going to get much ice time.

The Canucks beat the Sharks 3 times in 4 games last season.

The Canucks are 20-13-3 all time in season openers (Canucks.com)

I'll do my usual game predictions this season again, and pick the Sharks to win tonight, 4-3. They are warmed up already after playing last night and losing. The Canucks may show some rust. Anyone else wanna take a stab at the outcome?
Anyone attending the game tonight: please throw a beer bottle at Jeremy Roenick's face. Thanks.