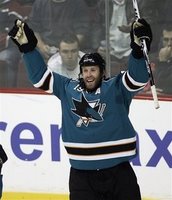 The Canucks seemed so composed and ready to take this game until Nabokov stoned Danny Sedin and absolutely changed the momentum of this game. 2:33 into the 3rd, Joe Pavelski capitalized on a fortunate mini breakaway with the Sharks up 2 men and wango tango....the Sharks took over, scoring 3 goals in 3:20 in the 3rd period. So much for the Sharks' offensive futility and especially Cheechoo's futility. Cheechoo's goal was brilliant...a wrister just under the crossbar while he was being knocked off his feet.
I feel bad for Luongo. Gad he played so well in this one. But tonight it was not to be.

The Sharks outshot Vancouver 34-26.
The Sharks were 2-for-7 on the powerplay. The Nucks were 2-for-6.
The Sharks won 58% of the faceoffs.
Joe Thornton had 1 goal and 2 assists in the 3rd period. What a bitch.
I drank 1.5 glasses of Spiced Rum and Coke before I had to go to work and miss the last part of the game.
I am going to guess that Cheechoo goes on a hot streak now that he has finally scored his first goal of the season. We'll see. 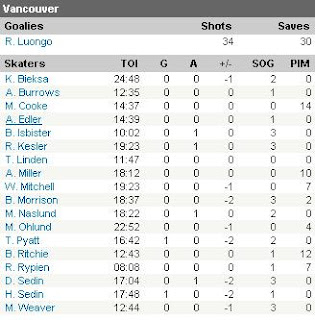