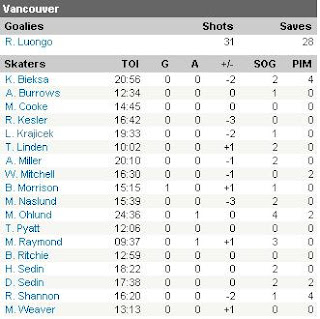 I thought I told someone to throw a bottle at Roenick. The old loud-mouthed bag of shit has scored 2 goals in the first period. The Canucks look flatter than my ex girlfriend's chest. The Canucks had a few chances here and there, but mostly we are seeing them look rusty from the goaltender out, and the Sharks are burying them.
Hard to watch huh? The Nucks will get their legs going in the 2nd, but it may be too late.
Shots: Sharks 13 Canucks 8

The Canucks get their legs back, but Nabokov is on his game tonight. It's too late, isn't it?

Now the Canucks really have their legs going. I get a kick out of how the fans chant "It's a goal" when Shannon's potential goal was under review. And then they boo after it's ruled 'no goal'. That was obviously a no goal. Shut the hell up people.
Chalk this one up to.......er.....the Canucks were too rusty at the start and just couldn't catch up after that. I sure appreciated Vancouver's effort as the game went along. Don't fret Canucks fans. The Nuckleheads will start much stronger against Calgary. 1st game jitters were to be expected.

1. Roenick (2 goals)
2. Nabokov (Steady as can be. Really strong when the Canucks came alive)
3. Morrison ( The best Canuck I reckon)

I liked the play of Ryan Shannon, but he needs to hit the net when he has a chance.
What happened to Mason Raymond??