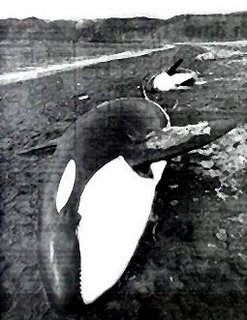 Don't mind the close score, because this one wasn't really all that close in several ways.
- the Wings outshot the Canucks 39-15, including 10-4 in the 3rd when they were up 3-1. Praise be to Luongo, who kept it close. The score could have been 10-2.
- the Canucks took 5 penalties to Detroit's 6, yet are still the most penalized team in the NHL.

I don't quite understand the Canucks' refusal to shoot the puck more tonight. The Wings fired pucks from all over the place. Are the Nucks gun shy? Waiting for the perfect shot? Well cut it out god dammit! It is not the way to win games.

Another very evident factor was Detroit's speed. The Canucks could not contain them tonight.

4-6-0. Locked into 11th spot in the Western Conference. 5 points out of a playoff spot. Only 5 points up on the Coilers. Is it time to panic yet? Not quite. But it's getting there. I don't see any improvement in this team as the games go on. It's actually getting worse isn't it? This is not how we were supposed to start off the season. Don't be surprised if Nonis pulls off a deal if the Nucks lose a few more. There are high expectations for this team.

Rick Rypien suffered a hand injury in the 2nd and did not return. 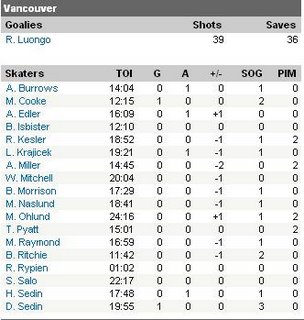