Share All sharing options for: Snaggle-tooth Jagr / Heard around Leaf nation after ass-kicking 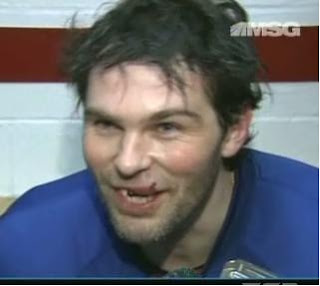 When Jagr acts like a baby, I really don't like the guy. But when he's enjoying hockey and cracking jokes, I really get a kick out of him. Such is the case last night, where he got hit in the mouth with a puck, losing several teeth. After the game he quipped:

"I didn't see myself yet. It's Halloween tomorrow. I don't have to buy a mask."

The Leafs once again proved their inconsistencies last night, getting drubbed 7-1 by the lowly Capitals. Here is what is being said in Leafland after that disgrace of a game. 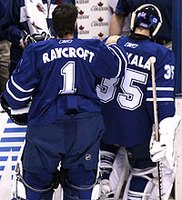 "How do you explain this? I can't," befuddled captain Mats Sundin said.

Well geez, Mats, you're the captain. You should know what's going on.

Perhaps coach Paul Maurice should have figured out it would be a long night when the Capitals spent almost the entire first minute of the game in the Toronto zone. Those defensive struggles spawned the first boo of the evening.
There would be more. Many more.
And many of them were directed at Andrew Raycroft, who obviously remains the fans' scapegoat despite the fact that starter Vesa Toskala struggled just as much. (Toronto Sun)

Typical Leaf Nation shit. I find it hard to blame either goalie too much still when the rest of the team hangs them out to dry.

The Leaf faithful was jeering the Leafs towards the end of the game, anticipating the start of the NBA season.

It was as though the Leafs really believed they are what Maple Leaf Sports & Entertainment is selling, when in fact the opposite is true. The Leafs, as a corporation, are incredibly successful.
As a hockey club, however, they've not won a Cup in 40 years, have missed the playoffs the past two seasons and are stuck in the ditch that is the NHL's bottom half. (Damien Cox, Toronto Star).

Folks, something is going to have to give here. Whether it's a big trade or a management shakeup, it seems unthinkable that even MLSE and its barely engaged board of directors will simply allow another season to limp along with two wins here, a couple of blowout losses there, an overtime triumph and then a couple more defeats.
This is the last two non-playoff seasons being played over again one more time. This is Groundhog Day, the hockey version. (Damien Cox again).

It's ok to jump ship, Damien. Bank on Paul Maurice losing his job first and maybe soon as JFJ will save his own ass.

Here's a two step plan to fix the Leafs. It takes money, but MLSE has that in abundance.
Step 1) Buy the Nashville Predators
Step 2) Trade the entire roster for their entire roster.
Be sure to include the GM and Coaching staff as part of the deal. Don't even let them be in the same room as the current guys for any length of time. (GeeIWonder, commenting at the Battle of Ontario.)

I'm thinking the possibilty that the players are tuning out Maurice is actually quite possible. Then again, the Leafs have been this inconsistent throughout Mauric's tenure......