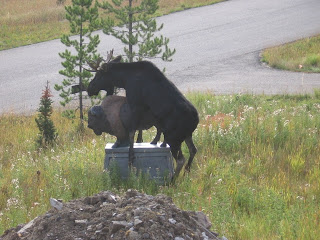 Couldn't resist. Someone sent me this today.

Damage Report below,
We need to tell you that there was some damage to the statue of the
American Bison in front of the house in Big Sky. We did attempt to
prevent the damage, throwing stones at, and hitting, the attacker. The
attacker could not be dissuaded, and kept up his assault for eight
hours. The incident even caused a traffic situation in front of the house.

The damage consisted of:
1) The loss of about two inches from the left horn. The broken piece is
on the work bench in the garage.
2) Hoof scratches on the side of the Bison.
3) Some chips in the right rear hoof.
4) Blood stains behind the Bison.

So, on to the game tonight between the Kings and Canucks. An interesting scenario here is that the Kings have lost 3 straight road games. The Canucks are 1-3-0 at home this season.
The highest scoring Canuck so far is Daniel Sedin with 8 points. Anze Kopitar leads the Kings with 11 points.
Both teams are coming off losses tonight, so it should be a spirited affair, so they say.
The Canucks won 3 of 4 games against the Kings last season, but the Kings have gotten much better on paper.
I picked the Kings to win on Facebook's sports betting application, so I had better stay with that. I say they win 4-2 tonight.
So I'm pessimistic.....suck it! I don't even have a great valid reason to pick the Kings winning. It's just a hunch.
It will be a treat to watch Cammalleri, Frolov and Kopitar though.