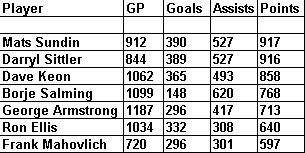 King Sundin passed Darryl Sittler's Leafs points-scoring record last night by scoring his 390th career goal. What better time to do it than at home at the ACC and in an 8-1 slaughter of the Islanders, the team that pushed the Leafs out of a playoff spot last season.
Strange how close the resemblance of Sittler and Sundin's goals and assists totals are. But of course, a big hats off to Sittler, who achieved the same points total but in 68 fewer games.
Sundin has been a model of consistency in his career, especially in his points-per-game statistics.
The announcer at the Air Canada Center gave Mats all 3 stars in last night's game, to the roar of the crowd.
But let's be honest here. I am a big fan of Sundin and always have been. But this accomplishment, as impressive as it is, won't mean much if Sundin doesn't lead this team to at least a Stanley Cup Final spot. That is what Leaf fans want, and I'd love to see Sundin get there as the captain. Alfredsson shed that "European captain not being able to get to the Finals" image last year. And now it is Sundin's turn. It would cap off a great career.
Sittler never had the proper personnel around him to get to the Finals because of jackass management. Sundin doesn't quite have that excuse. The Leafs have had some decent teams since he joined them in 1994.

Sundin, along with Garth Butcher, Todd Warriner, and a 10th round pick in 1994 were traded by Quebec to Toronto in exchange for Wendel Clark, Sylvain Lefebvre, Landon Wilson, and the 22nd overall pick in 1994.