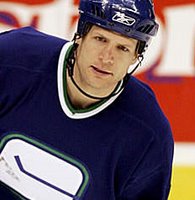 It is a 1-year deal and the dollar value has not been released. I wonder why Fitzpatrick was not or did not re-sign with Vancouver. Did we not want him? Did he not want to be here. Why? Did he want to play closer to his home state of New York? Was he unsatisfied being the #7 guy in Vancouver? Not liking the money here?
All I know is that he was cheaper ($525,000) than Aaron Miller ($1.5 million) and was probably just as effective. I liked his play because he was consistent, in my opinion.
One thing though, Miller is bigger, and can probably clear bodies away from Luongo's crease better than Fitzy could. Other than that, I have no idea as to why Rory isn't playing here this year.
Who the hell would even start the pathetic rumor that the Rangers are interested in acquiring Ed Jovanovski? That is laughable for obvious reasons: no-trade clause and dollars. Spector 'debunks' it pretty well.
The Rangers could use a scoring defenceman beyond Tyutin and Rosival, but not at Jovo's price.