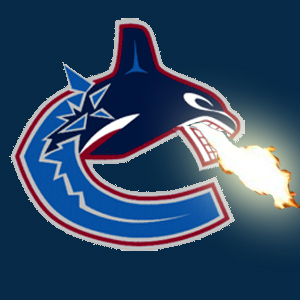 Unreal. Cory Sarich shoots the puck from the point and it goes off Bieksa's skate in in. Only 2:10 into the first. Deflating. It took the Canucks a while to get going in this game as well. The Flames were ready to go right off the hop.
I fell asleep about 6 minutes into the first. Now I'm alive.
Anyone catching the Hawks/Wings game out there? What a beauty.
Shots: Flames 10 Canucks 7

Wow, the Canucks come out flying in period 2, outshooting the Flames 10-3 after 10 minutes and scoring 2 goals (Ohlund and Naslund). It's good to see Naslund shooting the puck more lately. He's shooting from all over the ice, and that is what he said he'd do before the season started.
The Nuckleheads get into a bunch of penalty trouble in the second half of the 2nd yet manage to kill off two 5-on-3's.
I think Luongo would pursue an acting career if the NHL made the nets bigger (and he quit hockey like he said he would.) The guy is an embarassing overacter sometimes. Case in point, the sell job on on his knee after Langkow was pushed on top of him. That was pathetic. Aaron Miller shouldn't have pushed Langkow on top of Louie either. Not a wise move.
Oh look, Shannon has finally figured out how to hit an open net! The SSS line bagged a PP goal with under 3 minutes left. I like this Shannon kid.
Oh, look at Luongo skate gingerly off the ice after the 2nd ends. At least he's fine (hack hack)
Shots on goal: Canucks 13 Flames 8

The Canucks looked completely content to trap away the 3rd period until Naslund Naslund took a roughing penalty 5 minutes in. Langkow buried a shot from the slot right afterwards making this it close.
Langkow scored again later on as the Canucks' defence falls apart and gets out-muscled at 12:12. Uh oh. Calgary has had the momentum ever since Langkow's first goal in the 3rd. This could get fugly.
Could Luongo be the worst puck handler in the NHL??? Best actor...worst puck handler.
The last 5 minutes of the 3rd was intense but this one is going to OT.
Shots on goal in the 3rd: Calgary 9 Canucks 6

Too many men on the ice by Vancouver. Oh no...... The best chance on that PP went to Burrows shorthanded on a semi breakaway. Ha.
Naslund looks like a man on a mission tonight. He broke through 2 defenders and almost scored.
Then Naslund keeps the puck in the zone on a quick PP near the end of OT, gives the puck to Ohlund who wrists a pinball shot that goes off a defenceman and Kipper and into the net. Not sure if Sedin really touched the puck before it went in though.
The sea of red goes home in tears and this sober Canucks fan cheers.
Great game!
Shots in OT: Canucks 5 Flames 2
Overall: Canucks 31 Flames 29

-Phaneuf really is that good isn't he? I thought he played well.
-Is it going to be Daymond Langkow that benefits the most from Mike Keenan's coaching? It seems like it early on.
-Linden was a scratch tonight, as was Raymond.
- The Canucks were 4-for-7 on the PP. The Flames a lousy 1-for-6. 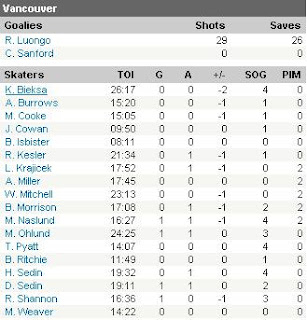