"It has to be preparation," said Naslund, who finished the night a minus-two. "This is as bad as I’ve seen this team play. We talked about getting back into good habits, like we had last year, but we haven’t done that so far."

Naslund may have been the best Canuck out there last night. Or at least, showed the most effort, along with the Sedins. But not even close enough of an effort.
I'm not going to dissect last night's loss. Just think of anything that can go wrong for a team in one night and that is what happened.
The Flyers team spent time bonding in Whistler prior to the game and it paid off. They came out flying last night and the Canucks looked unorganized and ....drunk I guess. I pity the fool that actually paid for that PPV game.
At the end of the game we were wondering which player was -4 or worse. I said Kevin Bieksuck, but the truth lies in the boxscore. 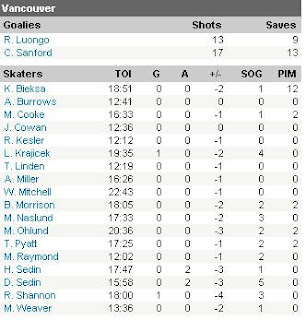 Anyone else wishing we still had RJ Umberger (even tho the bastard didn't want to sign here)?? I'm have nothing more to say about last night's disgrace, except that I hope it was a valueable lesson to the Canucks and that I can't believe how well the Flyers are playing already with all that new personnel.
Oh, and that Jesse Boulerice is an asshat for cross checking Kesler in the face. His suspension should be handed down today. What should his suspension be? 20 games?

"I reacted in a bad way - the wrong way," said Boulerice.


For all you Boulerice-haters, this clip of Aaron Downey knocking his bitch-ass out should make you feel better.
BOX SCORE