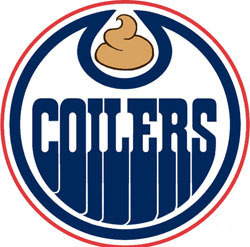 It can't get any worse than Wednesday night's 8-2 killing by the Flyers can it? Probably not. But I have temporarily lost faith in the Canuck's abilities to do much of anything. The Flyers made the Canucks look like slugs with their speedy game, and their ability to move the puck around so quickly. They looked like they have been around eachother for years, even though that team was gutted and reformed in the past 2 years.
The Oilers have the same ability to make us look like pylons. They use a speedy aggressive style. The Canucks are not the quickest team and need to get back to Vigneault Basics. Meaning: clog up the neutral zone and slow the opposing team down. Vancouver's "running around in their own zone" on Wednesday night was very uncharacteristic of this team under Vigneault.
Expect an adjusted effort tonight. Expect new line combos. I will update the Canucks' roster this afternoon as the info becomes available, since Ryan Shannon was sent back down to Manitoba on Thursday.
Ah, an update already...Rick Rypien has been called up today. A little bit of added muscle and speed.

A little gun-shy after the ass whooping...I'll say the Canucks settle back down and win this one 3-2. Don't underestimate this Oiler club. The Canucks had better not do that. They have enough skill to bury you if you let them skate circles around you.