Share All sharing options for: Kings 4 Canucks 2: Period by period 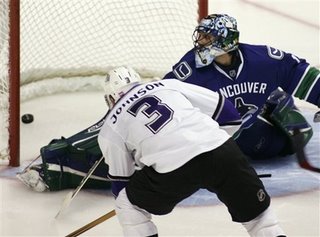 You almost couldn't ask much more out of the Canucks in period 1. They controlled the play for most of the period, outshooting the Kings 10-7 and leading 1-0.
-You gotta love Taylor Pyatt sticking up for Hank Sedin and fighting Ivanans and beating him to a bloody pulp.
-The Cooke-Burrows-Kesler line is paying huge dividends early and may put up some more points yet. Not only were all 3 in on the fitst goal, but they really set the tone in the first period by having a great first shift when the puck first dropped in this game.
-Aside from that, the Kings were short handed 3 times in the opening frame. Expect a different Kings effort in the 2nd, and see if the Canucks can hold them off.

And now for a completely different story....
The Kings storm back in the 2nd scoring 3 unanswered goals. The Canucks missed an in-close 2-on-0 and the Kings score soon after when Jack Johnson scored his first NHL goal on a Kings 2-on-1. Almost payback for JJ, considering Jan Bulis sent him ass over tea kettle with a hip check last season in I believe his first NHL game last season.
- Rypien's highsticking double major put the Canucks in an even bigger hole, as Mike Cammalleri had multiple swipes at the puck in front of Luongo and scored, as Bieksa just watched basically. Ah, tough night for Bieksa. The puck took an unfortunate bounce off his skate 4 minutes later, onto the stick of Luby Visnovsky who made a perfect slap pass to Frolov. 3-1 Kings.
The Canucks looked lost for most of the period, and the crowd let them know their displeasure, booing the Nuckleheads off the ice at the end of the 2nd period.
The Kings outshot the Canucks 8-5 in the middle frame.
Expect a better Canucks effort in Period 3, but I can see the super skilled Kings offence making them pay for any times they are caught up ice pressing to tie this one up.

**Anyone see Dany Sabourin's efforts against Carolina tonight? Wow. Super glove save in the shootout to preserve the win. He was amazing in goal for Pittsburgh tonight.**

The Nucks put up somewhat of a valiant effort to try tie this one up. Kesler nicely set up Ohlund, who roofed a beauty to make it close. But it was all scrambly from there. Dustin Brown put the nail in the coffin after being awarded with an empty net goal even though he didn't actually put the puck in the net (Naslund tripped him, Luongo was on the bench.)
Canucks outshot the Kings 13-2 in the 3rd but Jason Labarberra was solid.
Total shots on goal: Canucks 28 Kings 17

Good to see Kesler get the 2 assists as well. He showed an assload of hustle.

Vigneault mentioned post game that the Canucks are doing a lot of things right, but are not playing a full 60 minutes. When they stop playing well they are getting burned and are unable to come back.
The Canucks will get their game back, but it may take a little while yet. Maybe heading out on the road for 4 games will help. It must not be fun playing in front of a graveyard-like GM Place.